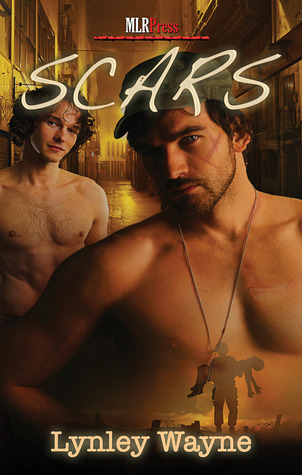 
Jace, an injured ex-soldier suffering from PTSD, saves Nathaniel, a nineteen-year-old street kid, from a beating. In doing so, he has no way of knowing that he will find his own salvation.


Jace came home from the war scarred in more ways than one. The physical scars that he carries are nothing compared to the mental ones. Struggling with PTSD, he has closed himself off from the rest of the world. The last thing that he ever thought to do was fall in love... Nathaniel has lived on the streets since he was thirteen. When he wakes up in a strange apartment after being badly beaten, he has no idea how he got there. Little does he know that his rescuer, the large man with scars crisscrossing his face, could hold the key to healing the scars that they both have

Gasping, Jace sat up in bed. Rivulets of sweat ran down his back, making him shiver in the cool air of the apartment. His heart was pounding and his whole body shook with a combination of fatigue, adrenaline, and fear.


The sounds of gunfire echoed in his head, accompanied by screams of pain. He could still hear the sirens going off in the distance, even if they weren't real. It was a familiar soundtrack that played on a continuous loop in his head, making it hard to break away from the nightmare. Because unlike most bad dreams, at one time his had been real. No matter how hard he fought in his dreams, he never could change the outcome. He couldn't save his friends.


He concentrated on the texture of the cotton sheets against his skin, trying to ground himself in the here and now. Thisâ€¦this was real, not the nightmare- at least not anymore. Even as he told himself that, he could taste the grit of sand in his mouth, feel the arid desert wind on his skin, and smell the scent of gunpowder heavy in the air.


He was the sole survivor. The only one to make it back alive. He'd beaten the odds and now every day was a reminder of what he'd lost and what he'd never be again.


Six months. That was how long he'd been stateside. For six months he'd been poked and prodded by doctors in every way imaginable. His shrink assured him his nightmares were normal for someone who had suffered the trauma he had. With enough time and hard work, she believed they would eventually go away. He wasn't so sure. After all, he knew plenty of guys from Vietnam who still suffered flashbacks. It didn't give him much hope of someday being normal, whatever that meant.


Untangling himself from the covers, Jace climbed out of bed. He wasn't going to be getting any more sleep tonight. As it was, he was lucky if he got more than a few hours.


After using the bathroom, he pulled on a pair of jeans and a shirt, grabbed his wallet, and headed to the kitchen, where he stood looking out the window, lost in thought, while he waited for his coffee to brew. The streets were quiet this early, or this late, however you chose to look at it. He'd been living in this apartment since his release four months ago. Every day he had some form of therapy and his place was within walking distance of the hospital.


As much as he hated living in a city, he wasn't ready to face his family. He hadn't even told them he was stateside. He knew if they found out there'd be no stopping them from coming to see him. For now it was better to let them think he was still in Germany.


Both his therapist, Dr. Summers, and Landon, a nurse he'd become friends with, had been trying to convince him to tell his family the truth. While he knew he should, he was afraid of how they would react to seeing his injuries. It was hard enough having strangers gasp and stare, but he didn't think he could handle it if his family reacted the same way. He knew what he looked liked. He looked like a monster now. Parents had actually pulled their children out of his path when he was walking down the street. He'd heard their whispered comments. Having his family look at him as if he were a freakâ€¦ It would break something in him. Something he wasn't sure could ever be fixed.


He used to be a fairly good looking guy. In high school he'd never had to work very hard to get a date. Girls had loved him. Hell, he'd even had a few guys hit on him. On more than one occasion he'd used his looks to his advantage. Those days were long over with. Now, it was all he could do to get most people to make eye contact with him.


The hardest part was that sometimes he would forget. Then it was like the first time all over again. He would relive the disbelief, the horror, the anger- all of it.


When he'd first woken up in the hospital, he'd known something was wrong. The thick bandages covering his face had been the first clue of how bad it was. The second came when no one would let him near a mirror until after he'd talked to a shrink. By the time he was allowed to see the damage, the stitches had been removed and the skin was all pink and shiny new.


Staring into that mirror, all he could think was that he looked like some mad scientist had sewn him back together, piece by jagged piece. The doctors said the scars would fade over time and become less noticeable. Not that it would really matter.


He let out a bitter laugh as he looked at his reflection in the glass. "Well, at least I will still turn heads."
Excerpt from MLR Press
Posted by Bronwyn at 12:30 am
Email ThisBlogThis!Share to TwitterShare to FacebookShare to Pinterest
Labels: From the Backlist