The Half Of Us by Cardeno C - book tour

The Half of Us
By Cardeno C. 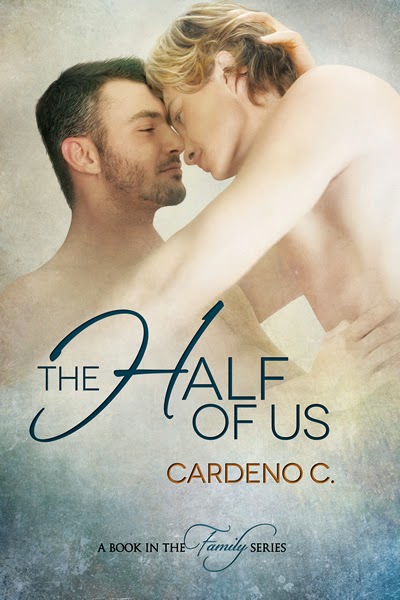 Synopsis
Short-tempered, arrogant heart surgeon Jason Garcia grew up wanting a close-knit family, but believes he ruined those dreams when he broke up his marriage. The benefit of divorce is having as much random sex as he wants, and it’s a benefit Jason is exploiting when he meets a sweet, shy man at a bar and convinces him to go home for a no-strings-attached night of fun.


Eight years living in Las Vegas hasn’t dimmed Abe Green’s optimism, earnestness, or desire to find the one. When a sexy man with lonely eyes propositions him, Abe decides to give himself a birthday present—one night of spontaneous fun with no thoughts of the future. But one night turns into two and then three, and Abe realizes his heart is involved.


For the first time, Abe feels safe enough with someone he respects and adores to let go of his inhibitions in the bedroom. If Jason can get past his own inhibitions and open his heart and his life to Abe, he might finally find the family he craves.

Fun Facts About The Half of Us
1.      It will make you want to try putting Milk Duds in your popcorn.
2.      The word “balls” is used forty times.
3.      After reading The Half Of Us you may suddenly notice if people move their arms as they walk.
4.      Small talk before a one-night stand gets Abe right where he wants to be.
5.      Jason and Abe find ways to spice up Netflix Recommends.
6.      Donuts are the way to reach uncommunicative teenage boys.
7.      Sometimes hugging and kissing are just as intimate as sex.
Excerpt
Abe turned around and leaned against the peninsula. “We’ll eat dinner and then we can get in the bath and talk.”
“Talk?”
Abe threw back his head and laughed.
“What?”
“We suck at this,” he said. “Both of us.”
Jason arched his eyebrows and curled one side of his lips up. “Oh, we both suck plenty.”
“Cut it out.” Abe chuckled and lightly smacked Jason’s shoulder.
“Sorry.” Jason cleared his throat and tried to look serious. “What do we suck at?”
“Talking.”
He reared back. “We talk.”
“We do,” Abe agreed. “But not about everything we should.”
“Fine.” Jason sighed dramatically. “If you feed me and get naked and wet with me, I’m willing to suffer through a conversation.”
“You really are a giver,” Abe said sarcastically.
Jason arched his eyebrows, brought his fist to his mouth, and coughed.
Abe shook his head. “Is there anything you can’t turn into a sexual innuendo?”
“Is there anything you can say that isn’t a sexual innuendo?”
“Apparently not,” Abe conceded. He ran one finger down Jason’s chest, over his stomach, and across his groin. “My subconscious must see you and think sex, so everything gets tainted.”
“Aww, baby, you say the sweetest things,” Jason said as he stepped closer.
Abe rolled his eyes.
“You do,” Jason insisted, his voice full of humor.
Abe shook his head and snorted.
Jason was amazed at how much better he felt. Less than an hour earlier, he had wanted to put his hand through a wall; now he was calm and happy. He snaked his arm around Abe’s waist and brought their chests together, trapping Abe against the counter. “You do,” he whispered into Abe’s ear.
Trembling, Abe turned his face into Jason’s neck and said, “You really do it for me.”
“I know,” Jason said. Abe was too earnest to play games and too inexperienced to effectively hide his emotions. His eagerness to be with Jason was evident in his every expression and action, which Jason cherished because the feeling was mutual even if he wasn’t always great at showing it. “Like I said.” He cupped Abe’s chin, tilted his head up, and then dipped down and brushed their lips together. “The sweetest things.” 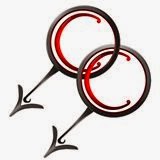 Cardeno C. – CC to friends – is a hopeless romantic who wants to add a lot of happiness and a few “awwws” into a reader’s day. Writing is a nice break from real life as a corporate type and volunteer work with gay rights organizations. Cardeno’s stories range from sweet to intense, contemporary to paranormal, long to short, but they always include strong relationships and walks into the happily-ever-after sunset.
Cardeno’s Home, Family, and Mates series have received awards from Love Romances and More Golden Roses, Rainbow Awards, the Goodreads M/Romance Group, and various reviewers. But even more special to CC are heartfelt reactions from readers, like, “You bring joy and love and make it part of the every day.”
Website ǀ Facebook ǀ Facebook Group ǀ Twitter ǀ Pinterest ǀ Goodreads

Posted by Bronwyn at 5:00 pm
Email ThisBlogThis!Share to TwitterShare to FacebookShare to Pinterest
Labels: Plugging this Shit