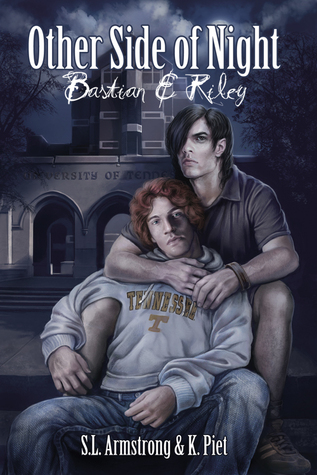 Vampires walk among us. For centuries, they have adapted, learning to pass undetected in our world. They no longer fear the day, only the sting of direct sunlight. They are students, bankers, lawyers, and even actors. But when the sun goes down, they are all united by their eternal thirst. We do not see them from our safe and comfortable side of the night. But sometimes, one of us is drawn away from the light and we cross into their world. Into the other side of night.

Sebastian Rossi's second year at the University of Tennessee began much differently than his first. He rushes to and from his classes, covered head to toe in thick clothing. Parties are a thing of the past, and dating hasn't been high on his list of priorities. No, high on his needs is blood. Lots of it. Adjusting to the changes no one even told him would happen following one great night of partying and sex has been hell for Bastian, but he's managing.

Riley Lynch's dream is to be a veterinarian. He works hard to pay his tuition, reads in every spare moment, and tries to forget the nightmare of his sophomore year. Summer has washed away all the bad, leaving him refreshed and eager for his junior year at UT. Life is finally looking up for him, and he has no intention of sliding back down into the depression that had consumed him during his last relationship.

A chance meeting brings their two worlds into alignment and passion sparks between them. When Riley learns of the changes Bastian is going through, he has a choice to make: walk away or embrace the night.