Week 95 is Our Sexy Galaxy, so easy pickings for me as I only have one that depicts outer space

The giant shifted forward onto his knees, bracketing Mike all snuggly between his thighs, as his hand snatched out, catching Mike gently behind the neck, pulling him forward slightly before cradling the bottom of his skull, and giving Mike all sorts of good feelings he wanted to fight against. Because there was no way he was submitting to anyone, not in the way he understood a collar stood for.
The fabric scratched at his neck slightly, it wasn’t painful, just awareness that it was there, and not going anywhere, anytime soon. It settled against his throat, soft rubber-like plastic hugged his Adams’ apple, an odd feeling, one that he was used to before the big man clipped the collar shut with a sharp startling noise in the quite quiet room, so quiet Mike just realised only held the breaths they both made. 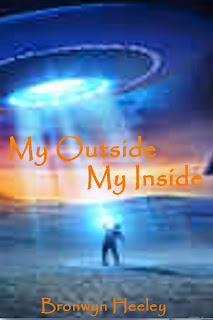 Something cold and unforgiving clicked in behind his ear, a softer but still completely foreign object sat against the outside of his ear, clearly wanting in, but needing help. It was weird enough that Mike automatically lifted his own fingers, brushing aside the giant ones and pushing it in. He wasn’t sure why he finished the process, other than it never occurring to him to pull it all off.
The giants hands lingers against the front of his throat, seeming to make sure the device there was sitting the way he wanted it to, before caressing the sensitive skin against his collarbones.
“Oh,” he sighed out as he pushed forward into that touch, not being able to stop himself one little bit.
The giant smiled a smile that had Mike blurt out, “Can you understand me?”
The giant’s smile was soft as he nodded his head.


My Outside, My Inside

Driven crazy from a childhood abduction, Mike has moved from mental institution to institution, all in the hopes of allowing him to forget his past, but little do his family and doctors know, his abductor wasn’t from this world, and he’s always planned on coming back.

This is a free story & ARe banned book