it may seem weird now, as technically they aren't together, this scene is very theirs

I’m revamping this one at the moment for release in November, it’s a story I wrote the year I submitted my first book as a blog story. It needs a bit of work, and apology for any and all mistakes, its still in second drafts, which means I’ve not even thought of edits yet.

“Hurry up, babe,” Mike heard Jake say has he wrapped his fingers around his cock. With a quick nod, he worked himself hard and fast, needing to do this for the man. Needing to get off.
His hips started rocking as he gripped onto the edge of the glass wall around the shower and got some leverage. This wasn’t about anything now. Just fucking.
Slick hand, run up and down, faster and faster, Mike’s hips worked, pushing some strength behind the thrusts, and he let it all wash over him. Let it build up until there wasn’t anything else to do but let it all go. Biting down on his lip to keep in the cry of pleasure, Mike let himself fall into orgasm, watched as he worked the cum out of his cock head and paint the glass wall. He wasn’t sure when he shifted so his cock faced that way, but he liked it. Like the streaks that hit and then slide down the fogged up the wall. 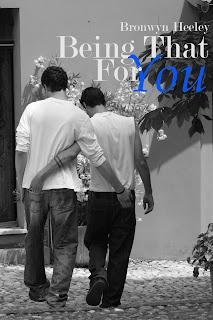 Weak knees and a smile on his face Mike washed up. Cleaned up. And got himself out of the shower. Dried with the towel around his hips, Mike picked up his phone and walked out the door, already clicking open and read: Payback is always so sweet with you, straight boy. Love ya.
“What you smiling at little brother?” Amy’s voice cut through him and surprised the hell out of him.
“Nothing,” he smiled back at his sister. She was tall, like the rest of them, with a body of womanly curves; he thought she’d be described. But that was his sister, so a lot of other descriptive words would have entered that space, depending on the mood he was in, and age.
“Sure, sure,” she muttered, a little wave of her hand as she walked to the stairs, to the rest of the house. “But it looks a hell of a lot like love to me.” she sang with her strut.


Being That For You

What happens after that kiss