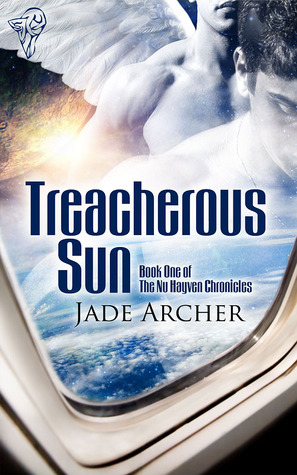 Mykel hates Lusaffar. Lusaffar hates Mykel. Which is as it should be. The way it's always been between Aenjels and Deamonds. So why can't they keep their hands off one another?

When Orison's sun mysteriously began to decay, the Intergalactic Council built a habitat ark to rescue the survivors. But it came at a price. Now Aenjels and Deamonds not only have to learn to live together aboard The Nu Hayven, they have to form the first Intergalactic Emergency Response and Peacekeeping Force. The only trouble is the two species have been at each other's throats for centuries!

Mykel leads what's left of the Aenjel population. He's homesick and heartbroken. He's also going to kick some serious Deamond hindquarters if they threaten his people! Unfortunately, the biggest threat to Mykel's sanity is the Deamond's gorgeous leader, Lusaffar!

Lusaffar has his own personal issues with Aenjels, but he's not above relieving a little tension with their leader, Mykel. If only the great pretentious pigeon wasn't burrowing under his skin and stirring up all sorts of disturbing things like feelings!

But even if these two stubborn males can overcome their prejudices, can the two most unlikely lovers in the universe survive a murderous saboteur in their midst?

Reader Advisory: This book is the first in a series and is best read in sequence