This is from a short story I just finished this week called Dragons and Mistletoe. It’s available to read when you purchase Leave It All (Saint Lakes #1) from All Romance eBooks, Smashwords, or Barnes and Noble. 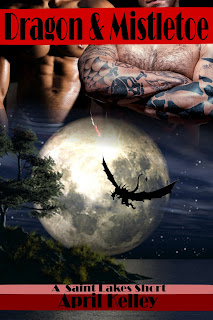 He knocked on Garridan’s door and heard a grunt, which he took to mean go in. Lucas took a deep breath and turned the knob on the door. Garridan had his back to the room. The blankets were barely covering him.
“I need your help.”
“Give me my mate.” Garridan turned and snarled out.
Lucas rolled his eyes at Garridan. At least he wasn’t trying to kill him anymore. An improvement.
“You’ll see him today, but only if you promise not to bond with him until he’s ready.”
Garridan showed his teeth, growling at Lucas. He sat up and started to stand, but Lucas froze him in place.
Lucas sighed and shut the door to the room, leaving Garridan froze. Lucas could feel him trying to pull against the control Lucas exhibited over him, but the dragon wasn’t strong enough to actually break it.
Lucas grabbed an empty laundry basket from the laundry room and carried it to the living room, where they had set up the tree.
He had about half the gifts in the basket as was getting ready to take the load to the car when he heard Bennett shout, “Lucas! I am not wearing that thing.”
Lucas rolled his eyes. In all the time they had been mated Bennett had never once yelled at him until just now. And over a stupid sweater. Sheesh. You’d think Lucas was asking him to wear high heels or something.
Lucas peeked his head around the corner of their bedroom door. “Just wear it, Bennett.”
“No.”
“I’m wearing a matching one, only mine is green.”
“No.”
“Please. Do it for me. You know I have trouble remembering all the little customs and traditions you guys have. So let’s make this our little custom. One that’s just between us. You know as well as I do, I’m going to piss someone off by calling them an animal or something at the clan run tonight, even though they turn into one. I still don’t get why that is such a bad thing. You act like an animal all the time, especially when we fuck.” Lucas looked at the scar on Bennett’s neck. “So do I, come to think of it. And you don’t see me getting all offended.”
Bennett dropped the towel around his waist and all thoughts when right out of his head. “I love you, Lucas. But that thing isn’t going on my body.”
“Can I go on your body?” Lucas said and didn’t realize he said that out loud until he saw Bennett grin. Bennett crooked a finger and Lucas walked to him.
Lucas wrapped his arms around Bennett’s neck and then gave a little hop, wrapping his legs around Bennett’s waist. He kissed him once quickly.
“Okay, here’s the deal…” Lucas started telling Bennett about the bet he had with Vaughan. Sometimes honesty was the best policy.

Also visit my blog www.writerparilkelley.blogspot.com every Friday for a sneak peek and what Bronwyn Heeley is working on! This week it’s a Moonlit Wolves snippet.
Posted by Bronwyn at 12:30 am
Email ThisBlogThis!Share to TwitterShare to FacebookShare to Pinterest
Labels: Aprils Interlude