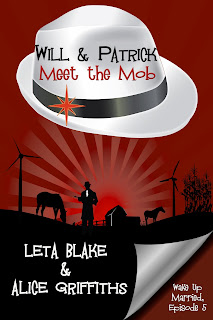 Follow Will & Patrick in this fifth installment of the romantic-comedy serial, Wake Up Married, by best-selling author Leta Blake and newcomer Alice Griffiths!

Patrick has finally accepted that he's in love with Will, but his newfound determination to do something about that runs up against his father-in-law's mobster plans. Though just what those plans are have as yet to be determined. As far as Will and Patrick can tell, they consist of blowing through town, wreaking small havoc, and turning the Patterson family's lives on end.

Will must face the truth about his family before he can fully come to terms with his feelings for Patrick. And Patrick has to decide if this whackadoodle world is something he truly wants to be part of forever.

Episode 5 of 6 in the Wake Up Married serial.

Will & Patrick…
Wake Up Married, Meet the Family, Do the Holidays, Flight Their Feelings & Happy Endings

Excerpt
The next morning, Will’s romantic musings feel like the product of overwrought exhaustion when Patrick wakes up cranky as a cat dunked in water.
“Turn off the alarm,” he snarls. “Make it stop.” Then, sitting up and glaring at Will like he’s going to kill him with the power of his mind, he demands, “Did you test yet? Did you eat? What’s your BG number?”
Will’s not even out of bed. Only fifteen seconds ago he’d had one hundred and seventy pounds of Patrick spread out on top of him. Of course he hasn’t tested yet. “I just woke up.”
“Don’t make me test you myself.” Patrick flings back the covers and stalks to the bathroom in his underwear. Will rolls his eyes but grabs his kit and quickly tests. Over the sound of piss hitting water, Patrick calls out, “Well? What’s the number?”
“Ninety-eight. Calm your tits.”
Patrick comes out, arms crossed over his chest and his hair sticking up everywhere. “Calm my tits? Calm your tits.”
Will indicates his nipples. “What? Check ’em out. Not even a little bit pointy.”
Patrick narrows his gaze but a reluctant smirk tweaks up the corner of his mouth.
“Let me guess.” Will laughs. “You know how to change that.” The knot of worry loosens in his chest. “Maybe later. I have to eat first.”
While they wait for room service, they shower and shave, and Will endures Patrick making a solid pitch for him to consider a Continuous Glucose Monitoring System.
“I’ll ask Dr. Anastasia about it,” Will compromises.
“And a pump.”
“Don’t push your luck.”
They throw on robes to greet Perry and his cart of warm, delicious-smelling goodies. Conversation is cut dead at that point as Patrick devours his bacon, muffins, doughnuts, and strawberries with fresh cream. Will’s healthier breakfast of cottage cheese, whole-wheat toast, and a small slice of quiche Lorraine isn’t nearly as exciting, but he doesn’t know how Patrick stays so slim eating like he does. If he tried it, he’d be the size of a house.
Once they finish breakfast, Will broaches the topic. “We’re going to need to talk about my dad eventually.”
“What happened to pretending he’s dead?”
“Unfortunately, he’s not.”
“Point.”
“And he’s staying in this building, so we’re bound to run into him sooner rather than later.”
“Better point.”
Will lets a wry grin spread on his lips. “But I’m not going to just sit back and let him run the show this time. I need find out why he’s in town and then get him to leave again. As soon as possible.” He stands up and brings the chess set over to the table, clearing away their plates. “If we can play ahead of his game, we can at least capture his queen. And then maybe even his king. Especially since he won’t be expecting us to be playing at all.”
“If by queen you’re referring to Kimberly, I don’t know about that. She’s a slippery one.”
“You think Tony’s back because of my mother?”
“Historically, her milkshake has brought him to the yard.”
Will sighs as he sets up the board. “She’s only been dating Jason a few weeks. Tony usually waits for her to get serious before he drops in to ruin her chance at happiness.”
“Maybe Jason proposed.”
“That’d be on The Hurting Times forums ten minutes after it happened. Have you seen it there?”
“Nope.”
“And Caitlin would have called threatening to jump off a bridge or shave her head or something drastic in protest.”
“So he hasn’t put a ring on it yet.”
Will moves his pawn forward. “It’s still a starting place.”
Patrick shoves one of his pawns out to an empty square. “Before surgery, I have to know what I’m dealing with. I can’t just cut into someone’s noggin without knowing if I’m going in to repair damage or to cut out a tumor. Same here. We need more information. What’s your dad’s sign?”
Will’s lips flatten. “Seriously?”
Patrick lifts his brows.
“Sagittarius.”
“I knew it!” Patrick shakes his head. “Never trust a Sagittarius.”
Will sighs and ignores this. “Even though the award ceremony isn’t until March, word is getting around now that I won the Healing Hero Award. I hope to God he’s not planning to stick around for that.”
“A congratulatory phone call from Mobster Daddy would have sufficed.”
Will moves a pawn in front of the right bishop. “You’ve been slapped with that stupid malpractice suit. That might have raised his hackles too, if he’s not sure of your intentions toward me.”
“I have zero honorable intentions toward you. So, he’d be onto something there.”
Will snorts. “You made an honest man of me.”
“For now.”
“Yeah.” Will smiles softly as gentle warmth blooms in his chest. “For now.” He bites his lip. “Do you think sex will be even dirtier once we’re divorced?”
Patrick looks up from contemplating the chessboard. “Are you planning on sleeping with me after we’re divorced?”
Will’s ears burn. “Would we have to stop?”
Patrick swallows, his blue eyes shading darker. “Not unless we want to stop.”
Heat zings in the air between them. Will clears his throat. “That’s a long time from now. Who knows when we’ll even have to think about it? You’ll probably be tired of sleeping with me by the time a loophole opens up for us.”
“I’ll never get tired of fucking you.”
Patrick sounds so certain that Will’s dick stirs and he has to look away, focusing his attention back on the chessboard. He’s not sure whose move it is now. “Anyway, there are plenty of reasons for Tony to make the trip from Minneapolis. I’m surprised I didn’t see it coming.”

Leta Blake
Author of the bestselling book Smoky Mountain Dreams and the fan favorite Training Season, Leta Blake's educational and professional background is in psychology and finance, respectively. However, her passion has always been for writing. She enjoys crafting romance stories and exploring the psyches of made up people. At home in the Southern U.S., Leta works hard at achieving balance between her day job, her writing, and her family.

Alice Griffiths
A long-time reader of romance novels, Alice Griffiths finally took the plunge into writing, teaming up with best-selling author Leta Blake for the 'Woke up Married' serialized comedy. A lover of tropes, Alice enjoys mining old ideas and putting a fresh, funny spin on them. Formerly working in the newspaper industry, Alice is now an art curator. She lives in Sydney, Australia.

You can find out more about her by following her online: Facebooks ǀ Twitter