Here's a little excerpt from the next Demon Elite books that April Kelley has coming out. Just to set up the scene so everything makes sense: Shade and Tanner are in a relationship. Tanner is mute and has to use ASL to communicate. This scene is about them trying to deal with their feelings for another man, Finn O'Reilly.


This is an M/M/M Contemporary Romance

After the comment Justin made about Finn, Shade figured Tanner would want to have it out one way or another. It didn’t surprise him when Tanner pulled him into Derek’s office, which wasn’t being used at the moment. Shade shut and locked the door behind him and pressed Tanner against the door, needing to feel the man’s body against his own. The familiarity of it was comfortable and put Shade at ease.
Everything was about to change between them and he wasn’t sure if it would be good or bad.
He knew Tanner well enough to know he’d let Shade go if he thought it would be best for them both. Tanner always thought he was the reigning authority on what Shade needed, but not this time. Shade was prepared to argue his case.
Now that we have problem number one moving in a positive direction, it’s time for problem number two.
“I know, baby.” He cupped Tanner’s cheek and met his gaze. “Before you say whatever it is you think you need to say, I want you to know that you are my everything. Please, don’t forget that.”
I’m not the only one, though.
Shade pressed his forehead to Tanner’s and closed his eyes.
Tanner tapped him to get his attention a second later and signed, you’re in love with Finn too.
”I’m attracted to him.”
You’re lying to yourself.
Shade turned to him. “I won’t act on it, Tanner. You know I’d never cheat on you.”
Maybe you should.
“I won’t do that and you know it.”
I’m telling you too.
“I fucking got that, Tanner. I just don’t get why you’re telling me too.”
Tanner looked away and didn’t say a word.
“No. You don’t get to say that to me and then just expect me to do what you say. This time you’re going too far. When I say I love you, I mean it and you know that. Not just the hearts and flowers love either, but the bone deep kind that digs in. And now every single day I worry about losing you because everything I love always goes up in flames, literally. So, you don’t get to push me away.”
Tanner’s eyes widened. I’m not giving up on you. That’s not what I want.
“That’s not what I want either.” Shade cupped Tanner’s cheeks and studied his gaze for long seconds. “Look, we can figure this out without it destroying us. Yes, I have a thing for Finn. Okay, I admitted it. But why is this all on me? You have a thing for him too. You forget one thing, Tanner. I can read you like a damn book. I know you’re at least attracted to him.”
Tanner nodded.
“Either we do something about it together or not at all.”
Tanner’s eyes widened and his mouth fell open. That’s not a decision that should be made lightly.
“No shit. And I’m not saying we should act on anything at all ever. What I’m saying is that whatever happens you and I are still solid. Always.”
Tanner nodded and looked away. Shade could count on one hand how many times he had seen Tanner cry. “Aww, baby. I’m sorry. Whatever I said, I’ll make it right.”
You just did, Tanner signed against his thigh. 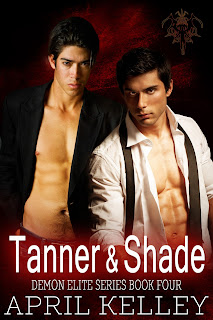 
Finnigan O’Reilly is a magnet for all the wrong men and this time he has really screwed up when his attraction involves two men in a relationship…with each other.


Finn made a big mistake once and he’s still paying for it. Not only was the man already married to someone else, turns out, he’s also a psychopath who is still hunting him. He thinks he’s safe enough at the lakehouse mansion, though. After all, he does live with a group of assassins and each one would do just about anything to protect him, especially two very special men that Finn should not be looking at with dreamy eyes. When his past catches up with him in a local park, its Shade and Tanner to his rescue. He doesn’t intend to make the same mistake twice, but intentions go right out the window when it comes to these two Demon Elite members. 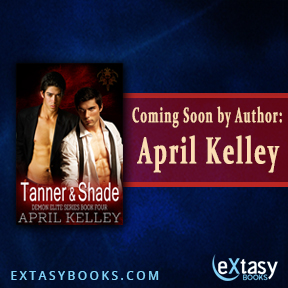