REVIEW, Heart of the Dragon

The Atlantis tale that started it all....

He was the answer to all her deepest desires, but their forbidden love would either bring their worlds tighter – or tear them both apart...
Searching for her missing brother, Grace Carlyle never dreamed she would discover a secret world populated by mythological monster – or find herself facing a sword-wielding being whose looks put mortal men to shame.
But there he was, Darius en Kragin, one of a race of shape-shifting warriors bound to guard the gates of Atlantis, and kill all travellers who attempted to stray.
Now Grace’s life is in his hands, and Darius has to choose between his centuries-old vow and the woman who has slipped beneath his defences and stolen the heart of Atlantis’s fiercest dragon.

Thoughts
This is another that followed the lovely lines of ‘writing a romance novel’; I say this because like the first book from the Dark-Hunter series, and mostly because of that book I had all those thought is my head so I saw it more than the first time I read it.
It starts off with Darius being put as a Guardian of the Mist, his roll to kill any human that comes through.
This is all good; he’d managed doing to his whole life 300 years, if I remember correctly. His like king of the dragons and it’s made a point from his men that he’s heartless.
When the mist calls he goes to do his thing and ends up entranced by his first sight of colour in, well as long as he’s held this post—there’s other crap wrapped around it, but you can read the book to find that out.
And from that first point the dance begins.

Darius has to kill her but he can’t. All he wants when she’s around is to fuck like bunnies, but he’s not real sure why. Why her? Why was she suddenly here making him see the world again?
All she’s thinking is that she needs to get the fuck out of here. Along with some questioning points as why she gets wet just looking at the gorgeous hunk. 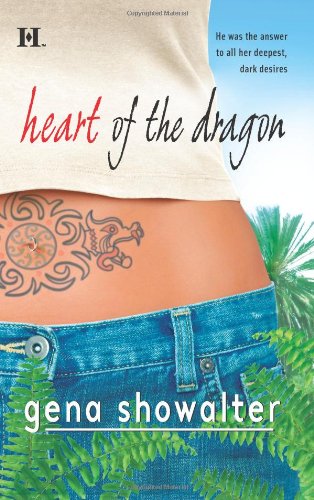 She ends up leaving and he follows, that ends with them fucking—and, oh! Oh, she’s a virgin.
Though I will give Showalter credit, it wasn’t a big deal, mostly you can tell she’s not really all that skilled or knowledgeable and it’s very much like she’s finally found out what it’s like to feel lust, and yet, it’s not a point that’s really made, not like most do one the fact. It’s almost like, wow, you’re a virgin, that’s hot, at least for the man that’s fucking you, but for us who don’t need that, cool.
I never saw what was good about a woman not having sex—not being interested in it, really people, sex rocks, and you should always know your body, really, how do you expect someone else to know what your about if you can’t get yourself off first?!
But enough about my thoughts on sex, like it matters.

Added to this, she puts in a part about two other characters, that’s all sweet talk and locked together to come out of it with a love they never thought they could get.

It’s a great book, other than the wording—I’m not really into old school, pointed speak—the book was great and hook me from beginning and I couldn’t stop until it was finished (and I’m talking series, not this book, I got the first one when Vampire Bride came out).
It’s a great way to start if you’re thinking of reading Showalter’s novels. Really, I was a fan of these books long into reading her Lords of Underworld series.

Series
[tb], Jewel of Atlantis, the Nymph King, the Vampire’s Bride, Amazon’s curse
☼☼☼
Posted by Bronwyn at 6:30 am
Email ThisBlogThis!Share to TwitterShare to FacebookShare to Pinterest
Labels: Review