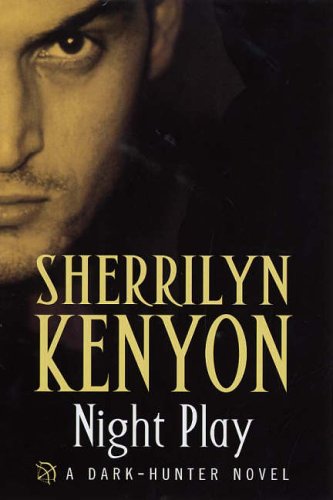 Synopsis
Bride Mctierney has just been dumped via FedEx. There’s not much that could ease such a broken heart until Vane Kattalakis wanders into her shop and her life. Their whirlwind affair feels too good to be true.
Deadly and tortured, Vane isn’t what he seems. Most women lament that their boyfriends are dogs. In Bride’s case, hers is a wolf. A Were-Hunter wolf. Wanted dead by his enemies, Vane isn’t looking for a mate. But the Fates have marked Bride as his. Now he has three weeks to either convince Bride that the supernatural is real or he will spend the rest of his life neutered – something no self-respecting wolf can accept...
But how does a wolf convince a human to trust him with her life when his enemies are out to end her? In the world of the Were-Hunters, it really is dog-eat-dog. And only one alpha male can win.

Thoughts
Let me give you a little background into this book before I get started on the review, this was one of the newer books that I read in the series, mainly because when time came and it wasn’t sitting on the shelf I moved on into the series. And though I always wanted to read this book, craved it, I didn’t get it until, I think, around the time Bad Moon Rising was out (I actually think I read that book first—no, wait! I’m more than sure I did, I think..?!)

It was one of those books that had so much from other books, it seemed a set one, like it really needed to be read in order for a lot of it to make sense, and even though you didn’t need to you should have. like this was a turning point in the whole family life they had and because of the fact that I had read on without reading this one I learnt all the leading factors in the book.
This is the review from right after I read it the first time.....

This book was a little disappointing to me, though saying that I loved Bride, and her real human emotions about her own body (I guess it’s not the same when you have centuries to get over body issue problems, but she’s real and I love her)

first of all it’s about a werewolf Vane, the leader—no, wait, he isn’t he’s a human/wolf pretending to be a wolf/human or more so he’s Arcadian pretending to be a Katagaria, which only his brother and sister know about, and have protected him his whole life, which kinda sucks when they father is a jackass and wants them all dead for being what they are, and more so fang (the brother) can’t challenge the father because it would look suspicion being that Vane was the eldest in there litter.

Complex aside (mostly ‘cause I suck at retelling shit that is actually easy, or maybe she just writes in a way that let’s all the information flow in your mind and stick there, or because she writes her books for individual reads rather than an actual series)

Bride on the other hand is a human who has just been dump by her ex (I suppose) and stumbles into a world of wolves and gods. I really do like her, she’s got something very solidly read about her and even though I’m not overweight (or could probly ever get that way, genes people nothing more) I can see it. I know what self doubt feels like and she does it in a way that most woman do, you see it, but you try not to let it rule you (yeah I said ‘try’)

I love the give and take between the other characters around her, and her mini brake down when she finds out about everything that’s happening around her—what her friends truly are. She does it with a respect that’s more about sitting still and counting your marbles then running and screaming.

Love it, though that’s just the start of the hysteria that comes from it all. But it’s something that I loved about the story, Bride’s hysteria, and that’s saying something mostly because I generally don’t.

The story ends on a good note and all, which they all do, but...I don’t know, I just felt it was very pulled back a tale from her usual.

The second read wasn’t much more exciting to me. I really couldn’t get into it. mostly because at the end of the day I didn’t particularly feel close to either character. There wasn’t anything about either of them that spoke to me or made me want to care in a way that Kenyon’s other characters did. It was like a book written because it had to be, rather than because she loved there story.

I felt more towards the other characters in the book, like Fury and I think this time it was because I haven’t read his story (he has one, it’s a short story, or novella) it’s made me want to read it. To get to know him better and what he’s been through.
But then, at the end of the day, you can look at both the characters and know that nothing really went wrong in their family, yeah, some tragedy but nothing like the Dark-Hunters and all Bride had going for her was her weight and the fact that her ex was an ass.
I do, however, love the family dinner they had with Brides family, where Fury tagged along. That was, to this day, the best part out of the whole book!

Series
Fantasy Lover, Night Pleasure, Night Embrace, Dance with the Devil, Kiss of the Night, Night Play, Seize the Night, Sins of the Night, Unleashed the Night, Dark Side of the Moon, The Dream-Hunter, fear of the darkness, Upon the Midnight Clear, Devil May Cry, Dream Chaser, Acheron, One Silent Night, Dream Warrior, Bad Moon Rising, No Mercy, Redemption, The Guardian, Time Untime,
Related stories: The Beginning, Phantom Lover, Dark-Hunter Christmas, Winter Born, Second Chance, Love at First Bite, A Hard Day’s Night-Searcher, the Dark-Hunter companion, Blood Lite, shadow of the Moon, Dragonswan, in Other Worlds, Until Death We Do Part
☼☼☼
Posted by Bronwyn at 6:30 am
Email ThisBlogThis!Share to TwitterShare to FacebookShare to Pinterest
Labels: Review