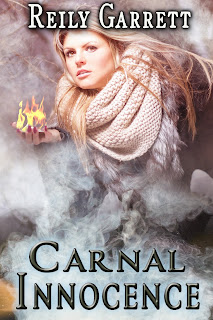 Callie, an extraordinary genius raised in a Think Tank superstructure, has unique talents sought by scientists and terrorists alike.
A botched rescue attempt hurls her into a world of spies and terrorists while leaving her to adapt to a sexual mutilation that will last her lifetime.
Nate, an ex-Special Forces private investigator, is unprepared for cyclone Callie sideswiping his life during a meet and greet at his BDSM club. After an old team mate is assassinated, he must ferret out a traitor while keeping Callie from the radicals’ clutches.
From their first meeting, Callie embodies an otherworldly aura with mysteries neither his heart nor mind can refuse to unravel as he helps them navigate a world of sensual exploration and betrayal.
From the winner of The Romance Review’s Top Pick award comes the sequel to Carnal Beginnings. If you love a combination of BDSM/romance and suspense, don’t miss this action packed adventure.

As if in slow motion and instead of gravity pulling them toward the floor, some inexplicable force drew them vertical. It was a split-second in time, barely enough for his mind to register, yet he stood straight once again.
Firm, feminine curves alerted every cell in his being to attention. A deep breath and a unique blend of spice and mystery prevented further speculation as to her identity. 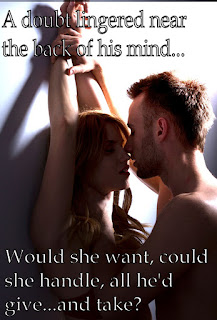 “Ah, crap. Sorry, mister. First time on roller blades.”
“Hmmm, so the calamity on wheels has a voice.”
With a screech and clatter, band members on stage stopped their warmup. All eyes focused on this mysterious mixture of curls and exotic-smelling femininity.
Thick tresses covered her face and failed to find any semblance of order. He could only guess at her features. Even so, the silken locks held him in thrall as they brushed against the back of his hands still holding her tight.
Soft and lustrous, they blunted his confusion over standing upright again. Nothing could’ve stopped him from bringing the satiny mane to his face. One whiff and a bouquet of exotic spices came to mind. Dear God. WTF?
Though she now stood directly in front of him, he still couldn’t discern her features. With great reluctance, he released the firm, small waist under his grip in anticipation of what he’d find under the wild mass of wavy mane.
For reasons unknown, reverence stayed his hand. In that twinkling of time, in this reality, nothing could match his imagination. He couldn’t bring himself to spoil the moment with anything less than perfection.
She must have felt it too. As she raised her hand, it stopped midair, frozen, not spoiling the moment of faultless purity.
When time resumed, allowing her to reach up and part her hair, sweeping it aside, the first glimpse almost drove him to his knees.
A person’s visage was merely a composition of their features—eyes, nose, and mouth. Some wrinkled by age, others scarred by life or misarranged from genetics. This…was so much more. A glance away lacked the necessary time to clear his throat.
“Yes, I have a voice. It’s why I’m here.”
“To make apologies for running over people? Perhaps you should have some type of license for those things. Even a tolerant master would turn you over his knee.”
His nod to her blades demonstrated a monumental lack of judgment. Attached to those blades for heaven or hell, he hadn’t decided which—were long, gracefully-toned legs bearing smooth, supple skin.
His gaze traveled north along the well-shaped gentle curves not to be dissuaded by the outlandish garment
covering delicate portions of her thighs. No stockings marred the perfection of this phenomenal anatomic vista.
A saw-tooth hem left long swags to dangle helplessly between and around her loins. Jesus. Is she wearing a G-string? As his gaze traveled back to her face, his conscience answered with a hell no.
On second thought, he realized she hadn’t dressed in an attempt to garner attention. This seraph merely garbed her thin build in a way natural to her angelic genealogy.
“Master? I have no master. I’m the singer in the band.”
How fortunate. His gaze traveled the length of her finely-toned, bare upper arm to her delicately boned finger, which pointed to the stage. Yeah, he had kinda noticed the stage, somewhere off in the distance.
The hard glares from the rest of her band brought a semblance of solidity to his thoughts. What the hell? If he hadn’t known each member personally, the warnings blazing from their collective stares might intimidate.
“And you’re looking for backup singers in the audience?” She’d look resplendent on his St. Andrews cross.
“No, I’m doing sound checks.” 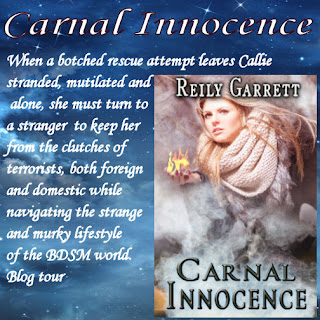 Though her kids are her life, writing is the life after. You know, the one you also enjoy…AFTER the kids are in bed or AFTER they’re in school and the house is quiet. This is the time she kicks back with laptop and lapdog to give her imagination free reign.
In life, hobbies can come and go according to our physical abilities, but you can always enjoy a good book. Life isn’t perfect, but our imaginations can be. Relax, whether it’s in front of a fire or in your own personal dungeon. Take pleasure in a mental pause as you root for your favorite hero/heroine and bask in their accomplishments, then share your opinions of them over a coffee with your best friend (even if he’s four legged). Life is short, cherish your time.