This is an excerpt of something Bronwyn and I are working on together. Sneak peek. You saw it here first! 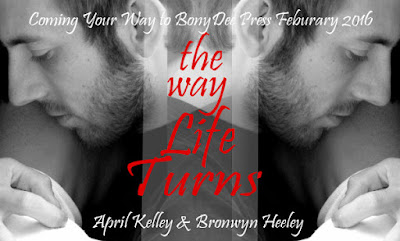 (Please note that this is an unedited Excerpt)

He decided to walk as the air eased his aches just a little and the sounds of the city around him calmed his nerves. He stuck his hands in the pockets of his hoodie to warm them. There was a slight chill in the air even though the sun was out. The nearest café was just two blocks away, easy walking distance from his apartment.
He had his head down and didn’t lift it even when he heard a horn beep. That was a common enough sound in the city and didn’t necessarily mean it was meant for him.
It wasn’t until a second later, when he heard his name being shouted, that he finally looked up. Scott had the window down on the passenger’s side of the car.
“What are you doing, babe? Need a ride somewhere,” Scott asked.
Johan hesitated to even answer. The only thing that was going through his mind was the picture Scott made last night with his condom covered cock waving around like a damn flag as he tried to explain himself.
How were they supposed to come back from that? It seemed impossible now that he was looking at Scott, who happened to be fully clothed at alone in the car at the moment. All Johan saw was how Scott was yesterday.
“Naw, I’d rather walk,” Johan said. He watched as Scott’s window went up. Johan sighed and turned, walking away from his ex-whatever-the-hell-they-were. Ex-friend probably described them best. After all, they were friends for several years before they decided to start dating. Not best friends or anything, but still close enough that they hung out on occasion. Mostly, the hanging out part had included Vince. They were both better friends with Vince then they were with each other.
He thought this little encounter with Scott was finished. Seeing him the morning after, what he was starting to refer to as ‘the incident’, was probably too soon anyway. But he heard a car door slam shut and then Scott said, “Wait up, Babe.”
He might have told Scott he would sleep on it and think about things. Instead, he had drunk way more than he should after ‘the incident’ and didn’t think about Scott at all, except for the mental snapshot he took of the man in his mind climbing off of Hank. The little shit.
Johan stopped just long enough for Scott to catch up with him.
“I was coming to your apartment to see you,” Scott said as he walked beside him. Scott tried to take his hand, but Johan pulled away, putting it in the pocket of his hoodie. Scott sighed, but didn’t say anything.
“I wasn’t home.”
Scott didn’t say anything for the longest time. The silence was uncomfortable as the turned the corner for the small café.

Also visit my blog www.writerparilkelley.blogspot.com every Friday for a sneak peek and what Bronwyn Heeley is working on! This week it’s a Moonlit Wolves snippet.
Posted by Bronwyn at 1:00 am
Email ThisBlogThis!Share to TwitterShare to FacebookShare to Pinterest
Labels: Aprils Interlude