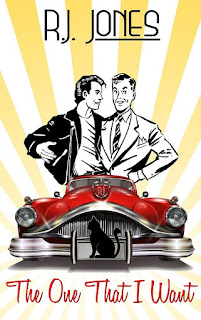 Jason escapes into the magic of a Broadway play every weekend. Musicals always have a happy ending and for a few hours he can believe there’s a happy ending waiting for him, too. When the tall drink of water who works on the top floor of Jason’s building, wants to take him on a date, Jason is surprised. After all, Jason is awkward and skinny, and sees himself as a boring accountant, while Paul is tall, dark, and incredibly hot.

Despite Jason’s reservations, Paul and Jason start dating and attending the shows Jason adores. But if Paul likes musicals as much as Jason, why does he always doze off? Is Paul leading a double life? Does he have a wife tucked away somewhere?

Jason knows Paul is hiding something and when the secrets come out, Jason finds his fantasy comes to life, right there on the stage. 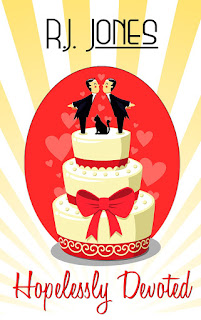 One year on from Paul's proposal, Jason is living a life he never dreamed of. As he fusses with his tie and readies to walk down the aisle, he reminisces about the previous twelve months. It hasn't all been smooth sailing for the happy couple in the lead up to their wedding, with obstacles big and small thrown in their way.

Marrying one of New York’s most eligible bachelors has Jason’s stomach in knots. Expectations of their society wedding are high, but out of love for Paul, Jason goes along with the grand plans because he understands Paul’s family has a reputation to maintain. But Paul has a surprise up his sleeve that just may see Jason getting the wedding of his dreams.

Follow Jason on his journey as he prepares to marry one of the most eligible bachelors in New York and find out just how Dave got his name.

AFTER SOPHIA finished calming my nerves, fixing my hair—I’d given in and gone to Pierre last week—and helping me look respectable enough to walk down the aisle next to her brother, she gave me a kiss on the cheek.
“Remember,” she said, grabbing my hands in her dainty ones, “you have five minutes. Breathe deeply and think of the honeymoon.” Her eyes twinkled. “When you hear the music, open the door, and Paul will be waiting for you. And stop fussing with your tie.” With another kiss on the cheek and a squeeze of my hands, she swept out of the room in a swish of silk to take her place at the front of the crowd.
Thinking of the honeymoon wasn’t the best idea. I didn’t want to face the hundreds of guests out there with a boner, and thinking of the reception was hell on my nerves. I thought of my parents, but that made me depressed. At least it killed my erection.
The next thing I knew, the music playing softly just outside my door grew louder. I peered out the window again and saw the guests, dressed in their stylish finery, stand and look toward the entrance. Their voices quieted as they awaited our arrival.
I squared my shoulders, took a deep, unfulfilling breath, and opened the door.
Paul stood waiting for me, as promised, dressed in a gorgeous tuxedo that hugged his hips and shoulders perfectly. When our eyes met, his smile took my breath away. He held out his hand for me to take.
“Breathe, babe.” He chuckled.
“Easy for you to say, you’ve probably been breathing the whole time.”
We stood facing each other, and Paul took my sweaty hands in his clean, dry ones. His eyes glistened with moisture.
“Do you love me?” I nodded. My ability to form words had left the building with Elvis. “Do you want to marry me?” I nodded more vigorously then. “Good. I promise to hold your hand the entire time. Just try and visualize everyone naked.”
“Even the women?” Yuck.
“Yes, even them.” Damn. 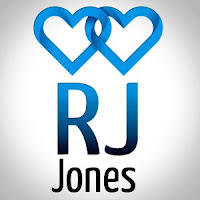 About the author
R.J. Jones started as a reader and eventually made the progression to reviewing. It wasn’t until two men popped into her thoughts, insisting on telling her their story that she started to write.
It started with one scene. A hot and dirty one in the shower…
R.J.’s initial thought was if she could write their scene then they’d shut up and allow her to concentrate on other aspects of her day. Not so. That shower scene ended up being 3000 words long and three hours of work.  And still, they didn’t shut up.  They told her their entire story and she didn’t sleep for days. Sometimes she couldn’t keep up with what they were telling her and she had to keep a notebook by her bed.
Whilst she was writing their story a side character decided he needed his story told too. Then other characters followed suit.
You see the problem? If she ever wants to sleep again then she needs to write.
R.J. is a wife and a mother to two boys. She is surrounded by males. Even her dog is a boy.