Book Biltz - More Than A Friend by Nic Star 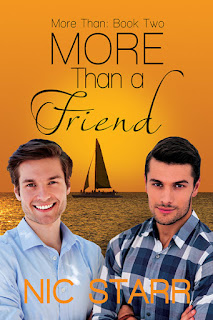 Tim Walker is a free man. He’s broken up with his girlfriend and is ready to move on to a new relationship. But the relationship he wants to pursue is fraught with challenges. Firstly, Scott Richardson is a man, and only Tim’s closest friends know Tim’s bisexual. Secondly, everyone knows Scott relishes the single life. And then there’s the big one: Scott is the younger brother of Tim’s best friend, Paul.

Scott can’t deny an attraction to his brother’s friend Tim. Lean, dark-blond, and blue-eyed, Tim is hot and hard not to notice—especially since Scott and Tim work together. Too bad the man is straight, and too bad Scott worries how Paul will react if Scott hooks up with his best friend.

Tim and Scott want to see if there’s a chance for more than friendship between them, but neither of them wants to lose Paul. Together, they must find the courage to follow their hearts and find a way to have it all.

Tim followed Scott down the long hotel corridor. The patterned carpet and beige-toned walls seemed to extend forever as they passed door after door. Tim’s nervousness grew with each step, his chest getting tighter and tighter with each room they passed. By the time they reached the last door, he was almost light-headed with anticipation.
Tim stopped directly behind Scott and waited anxiously as Scott pulled the key card from the back pocket of his jeans. Scott slid the card into the reader on the wall and the door unlocked with a soft snick before he pushed it open. Tim stood at the threshold, reluctant to follow Scott into the room. He knew that once he took the next step, there would be no going back. Whatever happened from now on, it had the potential to alter the course of his future forever.
He was either about to make the biggest mistake of his life, or take a gamble that would pay off tenfold. 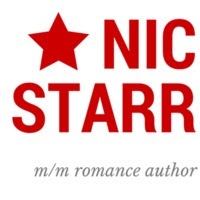 Nic Starr lives in Australia where she tries to squeeze as much into her busy life as possible. Balancing the demands of a corporate career with raising a family and writing can be challenging but she wouldn't give it up for the world.
Always a reader, the lure of m/m romance was strong and she devoured hundreds of wonderful m/m romance books before eventually realising she had some stories of her own that needed to be told!
When not writing or reading, she loves to spend time with her family-an understanding husband and two beautiful daughters-and is often found indulging in her love of cooking and planning her dream home in the country.

You can find Nic on Facebook, Twitter and her blog. She'd love it if you stopped by to say hi.

GIVEAWAY
a Rafflecopter giveaway
Posted by Bronwyn at 12:30 am
Email ThisBlogThis!Share to TwitterShare to FacebookShare to Pinterest
Labels: Plugging this Shit