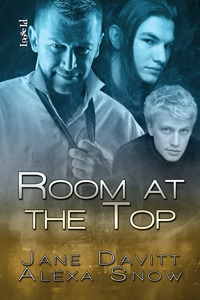 Austin and Jay want a Dom in their lives, but not a third person in their bed. When their Dom moves away, replacing him turns out to be trickier than they’d thought and the two of them are getting desperate. Enter Liam, a friend of their former Dom, deliciously sexy and stern, ready to spank them into shape – and straight.

It’s all going so well, but can Liam separate his growing attraction to his two young subs from what they do during their sessions? And can Austin and Jay handle the discovery that Liam means more to them than he was ever supposed to?

With Austin’s younger sister April ready to do anything she can to make life difficult for the three men, is it going to be possible for Austin and Jay to prove to Liam that there’s room in their life – and their bed – for him?

Room at the Edge
Posted by Bronwyn at 12:30 am
Email ThisBlogThis!Share to TwitterShare to FacebookShare to Pinterest
Labels: From the Backlist