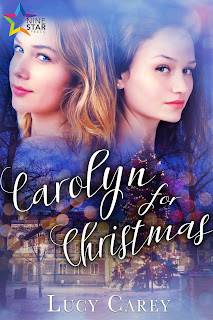 Christmas. It’s supposed to be a time for peace, love, and goodwill to all men. But not for two women when it comes to nabbing the solo spot in the big Christmas concert. To get that spot, they’ll do whatever it takes…
Carolyn Roche and Saoirse Barrett have known—and hated—each other for a long time. Their lives have been dedicated to one-upping each other. Carolyn has worked hard to shake off her poor roots, landing a top job at a major accountancy firm. Saoirse has worked just as hard to set up her own business in the vain hopes of impressing her tough father.
They’re equally matched in life—and in vocal talent. But neither is willing to let the other woman win.
That is, until they find themselves trapped in their old school, with just a bottle of vodka and their memories for company. There, they discover that the hatred they feel for each other might not be hatred after all…

I love finding out about other countries’ traditions and customs, especially when it comes to the holidays.

I come from Ireland, so my experience of Christmas is completely Irish. That’s why I decided to set my new holiday novella, Carolyn for Christmas (available from NineStar Press), in Ireland. It follows two rivals, called Carolyn and Saoirse (a girl’s name pronounced “Seer-sha”), who are competing for a solo in a Christmas concert.

Christmas in Ireland is quite similar to a lot of places: We decorate a tree, wait for Santa’s arrival (though he’s often called “Santy” where I’m from), and give each other presents.

There are some differences to Christmas in Ireland. For one, because we don’t have Thanksgiving, Christmas dinner is a bigger deal than in some places. A long time ago, goose used to be the bird at the centre of the table, but in the past few decades, turkey now takes centre-stage in most houses. (In some parts of the country, spiced beef and/or boiled ham also make an appearance.)

We pull Christmas crackers—cardboard tubes cover in shiny paper that make a crack when you pull one with someone else at the table. The wearing of the flimsy paper crown and the use of an invariably crappy prize you find inside is mandatory.

Around this time of year, people who haven’t crossed the door of a religious institution all year suddenly have a conversion. The country is still (on the census forms at least) largely Catholic, so people attend mass dressed in their best clothes. Others go to church.

Fun fact: A lot of Catholic people used to go to something called Midnight Mass on Christmas Eve. It was originally held at midnight but (and I hate that this reinforces some Irish stereotypes) people used to come in drunk when it was scheduled that late. So now it happens around nine o’clock at night instead!

The extra drinking might have something to do with the fact that all pubs in Ireland (except in the airports or train stations) close on Christmas Day. That day and Good Friday at Easter are the only days pubs are legally required to close in Ireland.

We set up nativity scenes in schools and outside churches. The baby Jesus is not allowed to be placed in the manger until Christmas Day.

And on the 26th of December, known as St. Stephen’s Day in Ireland (unlike Boxing Day, as it’s known in the UK), people in the very south of the country also celebrate Wren Day. They used to hunt a wren to martyr it but now they follow a fake wren on a decorated pole. People dress up in masks, straw clothing, and parade around town with a céilí (traditional Irish music) band playing behind them.

So that’s a little bit about Christmas in Ireland. What are the holidays like where you live? Do you celebrate Christmas or another religious holiday? What do you eat or do this time of year?

If you’d like to get more of a flavour of Ireland at Christmas, you can read more about it in Carolyn at Christmas.

I hope you enjoy it. A very Happy Holidays to you and yours. And thank you to Love Bytes Reviews for hosting me. :)

Who the hell did that one think she was?
Saoirse Barrett narrowed her eyes and took a long sip of her Chardonnay. She was momentarily distracted from her irritation as the wine hit her tongue and she grimaced at the taste of it. Pub wine was just the worst.
It certainly wasn’t making the sudden tension any easier to take. She did her best to look nonchalant, like she wasn’t bothered by the rudeness that had arrived at her table. At the other end of the table, Carolyn bloody Roche was staring in Saoirse’s direction, with an expression on her face like she’d just got a whiff of dog shite.
Saoirse had watched Carolyn and her friend in the too-high heels tottering this way with mounting dread. The closer they got, the more Saoirse had started to wish that Carolyn would maybe just fall into the big, crackling, open fire beside Saoirse’s table. It was bad enough she had to put up with Carolyn once or twice a week at rehearsals; spending a Saturday night looking at her sour face was anything but her idea of fun.
And now, to add extra insult to the matter, Carolyn was trying to drag her friend away from her seat at the end of Saoirse’s table, like Saoirse was the troublemaker.
That bitch, she thought. Like I’d even offer her a seat.
She nudged her friend, Lorna, who was feigning interest in a conversation about the recession with some random guy in an expensive shirt. As pleasantly as she was smiling, Lorna had gone dead behind the eyes. She’d welcome Saoirse’s interruption.
“Jesus, they’ll let anyone in here,” Saoirse said.
Shit. Saoirse had meant to whisper the barb but it came out louder than she’d been expecting. Must be that cheap Chardonnay.
Carolyn whipped around from dragging her friend away and gave Saoirse a stare that sent a shiver down her spine. She’d obviously heard.
“And a Merry fucking Christmas to you, too,” Carolyn snarled, then curled her lip and turned away.
Thank God, Saoirse thought. That could have turned really ugly. As much as Carolyn had changed in the past few years, Saoirse knew her of old—she came from one of the rougher estates in the town and would likely make mincemeat of Saoirse in a fight, if she was so inclined.
The heavy, aggrieved clatter of Carolyn’s heels on the stone floor was like music to Saoirse’s ears. She took a swig of her Chardonnay to hide her relieved expression.
“God, the state of her,” Lorna whispered as they watched Carolyn’s retreating form. “You’d think with getting that job, she could afford not to dress like some sort of goth reject.”
Saoirse didn’t quite agree with the assessment—she thought Carolyn’s shape in her tight, black jeans tucked into studded boots and her short leather jacket, impractical for the cold, suited her. She kept the thought to herself and continued guiltily appreciating the swish of Carolyn’s hips as she strode through the crowd.