Guest Jo Tannah with The Hunt 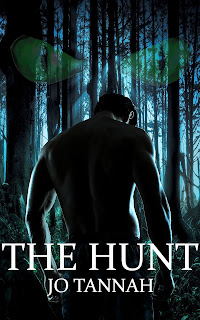 When the hunter becomes the hunted, the only thing left to do is run.

Lieutenant Marcus Kildud and his men are rangers for hire. They specialize in insertion, extraction, escape and evasion. He answers an urgent request from the Planet Terrus’ Prelate, the Lord Fulsam, whose son has disappeared and presumed dead.

Their task is to find the ring the Prelate’s son wore. The promised compensation and bonus offered are enough to make this their team’s final mission.

What they meet in the forest is something none of them have ever encountered before. Marcus now faces the unimaginable. He realizes too late that sometimes, running away may be the only option left to staying alive.

WITH A HISS of decompressing air and a metallic groan, the ramp began to slowly lower open. Shafts of bright, white light pierced the dimness inside the cabin. Marcus flinched, brought his hand up and instinctively covered his eyes, then turned away from the natural brightness. Having been cooped up in the star cruiser, even for just a few hours, had made his eyes too used to the artificial muted light. A muffled thump and a blast of warm, moist air made him lower his hand, and he turned to look toward the opening. Through it he saw the color green. Marcus took a deep breath, taking in the moist, thick air, reminding himself for the hundredth time the reasons why he and his men were on this Goddess-forsaken planet. After he picked up his carry on, he moved toward the exit. He did not bother to look behind him to check if his men followed.
Marcus felt rivulets of sweat roll down between his shoulder blades and he groaned under his breath. He already regretted having accepting the case at all before remembering again why he had. With what they were looking to earn, they could all retire and not have to face separation from families and loved ones for days, even months, on end. However, reading about the planet’s oppressive heat and high humidity index and standing in it were two different things. Stopping at the edge of the landing platform, he looked up and around him seeing no relief from the green.
Everywhere stood massive, tall trees, thick shrubs, and even thicker ferns. He looked down when he felt his boot slide and saw that a thin layer of moss covered the path he stood on. Taking careful steps so he wouldn’t slip, Marcus walked over to where three pale-skinned, red haired men, dressed in light gray robes stood watching him and his men, eyes wide and full of fear. 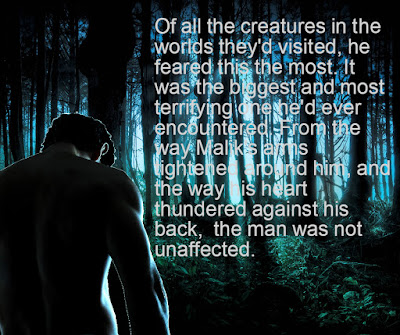 I am a wife, mother and blogger by day, a writer by night. It can be  difficult to say the least but it is a challenge that keeps me on my toes.

I grew up listening to folk tales my father and nannies told either to entertain us children or to send home a message. These narratives I kept with me and finally I wrote them down in a journal way back when I kept one. Going through junk led to a long forgotten box and in it was the journal. Reading over the stories of romance, science fiction and horror I had taken time to put to paper, brought to light that these were tales I never met in my readings.

The tales I write are fictional but all of them are based on what I grew up with and still dream about. That they have an M/M twist is simply for my pleasure. And I hope, yours as well.

Posted by Bronwyn at 10:53 am
Email ThisBlogThis!Share to TwitterShare to FacebookShare to Pinterest
Labels: Plugging this Shit