April’s on Holidays, for the week, so let’s have some fun, and by fun I mean an excerpt of my upcoming release Being That for You. 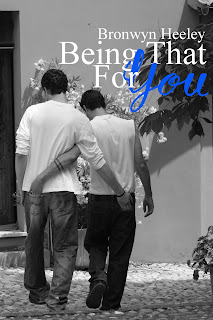 “Do you think I’d ever lie to you?” Jake asked.
“We lie the most to the ones we love.”
“Maybe, but it’s those we love who see right through us. I know you see through me. I guess, more than anything, it’s about trust. Do you trust me, baby?”
Mike sighed, sinking into his chair. “That’s just it. I’m not sure if you deserve it anymore.”
“What! Why?”
Mike waved his hand, brushing the air. “It’s… little things. I think… shit.”
“What things? Tell me. What have I done?”
Mike sighed again. “I don’t know how to say it without sounding like I’m bitching. It’s nothing big. I’m just… I guess I’m… it’s just that—fuck it! It’s nothing. There’s nothing. I trust you, I have since I started falling for you, and unless I walk in on you fucking him I’ll keep trusting you.” With that he got up and walked out the door.
“What the fuck was that all about?” Jake muttered to himself. “And who’s he?” he yelled after his lover, but it was too late, Mike was gone. Even if he had heard, he wouldn’t have answered.
Fuck. Jake didn’t know what the hell was going on with his man. Things between them hadn’t been at their bubbly best lately. Hell, wasn’t until recently, when he’d realised their anniversary was coming up, that he’d finally admitted to himself things weren’t going so great. But they weren’t terribly bad, which almost made it worse.
Jake stood with a sigh and started getting ready for work. It hadn’t been easy at the centre either. A new shipment of boys had arrived after Detective Martins busted a massage parlour for using minors to give happy endings. Since they’d started providing rehab his job was ten times harder. Which was the reason he was heading in to work again tonight. He had to go talk one of the younger boys into calming down.
Jake gathered his courage, which he trembled on the edge of losing, and thought back to his conversation with Mike. They’d been cuddling on the lounge, like they did almost every night, when Jake realised they were stuck, that it has been a long time since Mike started anything between them. He just rested in Jake’s arms, making small talk and yelling at the TV screen. He always used to initiate things, and the lack of interest was a huge indication something was wrong.
He missed his Mike, missed the man whose idea of relaxing involved water fights in the kitchen or couch wrestling matches that ended with them naked and sweaty. He wondered where that man had gone, why Mike had changed into a subdued version of himself. Then his phone had started to ring and Mike heaved a sigh so loud Jake heard every word Mike wasn’t saying.
The call represented his work, his dream, his life— but it was turning Mike into someone who didn’t want to start anything, ‘cause Jake had gotten called away and left him hanging too many times. Jake knew that, they’d even had a few small blow-ups over him leaving, he just hadn’t really been listening. Mike hid his hurt in self-mocking quips, said with a smile and an edge of laughter. It was a tone Mike had perfected long before Jake had met him because, even though Mike was a large man, he didn’t particularly like confrontation. Yeah, he got in your face if you pissed him off, even yelled back if he thought he needed to, and was quick to defend people he loved, but when it came to standing up to Jake he was oddly shy. Almost like Mike though he might walk out on him if he got to angry, and Jake didn’t want that. At least, Jake hoped that was the case, and Mike wasn’t just waiting ‘til he’d saved up enough money to leave. Jake wasn’t sure what he’d do if Mike ever left him.
“You okay?” Mike’s voice broke through the heartache the thoughts bouncing around Jake’s head caused, and he smiled sadly. Mike still sounded pissed. It wasn’t a tone he used all that much, and if it’d been anyone else Jake knew there would’ve been pillows waiting for him on the lounge when he got home ‘cause he wasn’t welcome in bed. But that wouldn’t happen with Mike. No matter how upset he was, no matter how much they yelled at each other, they always ended the day in the same bed and woke up in a tangle of limbs. It was how he knew they were perfect for each other, that this was the real deal.
“Jake?” Mike reminded him.
“Yep.” He leaned over the back of the lounge and kissed Mike softly on the lips. “I’ll try not to be too late—”
“But you probably will be,” Mike finished with a resigned half-smile Jake realised he’d been seeing more often than his usual smile.
“You know I love you, right?” Jake asked, hovering above his lover’s face, his low back aching slightly from the angle.
Mike’s smile turned sweet. “’Course. Love you, too.”
They kissed softly, a slight dampening of lips, before Jake pulled away and Mike turned his attention back to the telly. The instant flicking of channels made Jake’s chest tighten around his heart. “You better go before the place burns down,” Mike laughed that laugh. He  hated that fucking laugh.
“Yep. See you when I get home,” Jake half-questioned, swallowing down the pressure pushing at the back of his eyes.
“I’ll see you in the morning,” Mike countered, smiling at Jake over his shoulder, his eyes sad. “Hope everything goes well, babe. Call if you need help.”
“Will do,” Jake said as he walked out the door, absently rubbing at the ache in his chest as he got closer to his car.