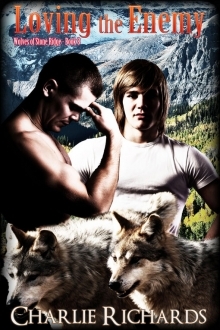 
Miach Coleman can’t believe the turn his life has taken. He’d worked hard to take control of his life after being shoved into foster care when his mother died. The minute he’d turned eighteen, he’d joined the military. Learning that shape-shifters are real and what a threat they could be to humanity, he moved to the private sector, working for the Crystal Lake Corporation. He allowed the scientists to use their research to increase his agility, strength, and healing so he could combat these creatures. Now, having spent three weeks under shifter’s care, he’s begun to question everything he’s learned about them. They treat him far better than the scientists treat shifters. No experiments. No neglect. No torture.


It took Nick Greely three long, sexually frustrated weeks, and a heart-to-heart with his alpha, to finally admit that Miach could be his mate. But there’s a reason Miach is their prisoner. He’s been brainwashed by the scientists to think that all shifters are abominations. Between the experiments done on him in the name of science and the fact that the wolf pack has had to keep him prisoner for so long because he’s a threat to their pack, Nick has no idea if he can reach the man, mating pull or not.


Miach is amazed at the camaraderie he sees between the wolf shifters, proving that they’re not just instinct driven killing machines. And Miach can’t deny the attraction he feels for Nick, one of his sexy guards. When Nick hits on him, he takes what the wolf offers, changing his life in a single night. But Miach quickly discovers there’s no happily-ever-after written in his stars. If he wants to keep Nick, Miach will need to keep him safe from another shifter who wants him dead, get away from a fellow mercenary trying to rescue him, and prove to the wolf alpha he’s sincere, all while keeping his integrity intact

“Enough talk of the scientists, Miach.”
Pressing forward, Nick rested a hand on his arm while the other hand landed on Miach’s thigh. He swallowed hard as the shifter he’d lusted after for the last couple weeks closed the distance between them. Nick’s hand on his arm slid up to gently massage the nape of his neck, sending heated sparks of awareness through Miach’s body.
His mouth cracked in anticipation of quenching the burning heat he saw in Nick’s hazel eyes. Then the other man’s lips were on his, pressing lightly, brushing sensually. Nick’s tongue flicked out, and Miach couldn’t stop his own from meeting it. The dark, masculine, and earthy flavors of the other man burst over his tongue, everything a man should be.
He shivered when Nick’s hand slipped around and cupped his jaw, the thumb pressing at the corner of Miach’s mouth, asking for him to open wider, give the shifter more access. He knew this was wrong, he shouldn’t be making out with his jailer, no matter how sexy he was, no matter how much his aching prick wanted to take this further. He should use this to his advantage. From this position there were at least a dozen ways he could knock out the clearly distracted wolf, but Miach couldn’t seem to think of a single one.
Then the pressure of Nick’s lips eased, and Miach nearly whimpered at the loss. “You’re thinking too much, Miach,” Nick whispered, his breath mingling with his own. “Just forget everything for a while and feel.”
With a groan, Miach gave in to the need coursing through his body. He opened his mouth wide and greeted Nick’s tongue with his own. That first, full contact acted like a flash fire in a pan, blazing hot lust shooting through him. Miach brought his hands up, one twining in those silky strawberry locks he’d been dying to feel, the other arm wrapped around Nick’s torso. He opened his legs and pulled the shifter between his thighs, liking how the slightly smaller man felt pressed against him, all hard planes and firm flesh.
Miach needed more. He needed skin, and friction, and sweaty, grunting bodies striving toward completion. A gripping desire like nothing he’d felt before took hold of Miach, and moving one hand to Nick’s ass, he lifted and flipped the man onto his back on the bed.
A low growl sounded from the shifter, Nick’s eyes alight with lust, and something else that Miach’s blood-deprived brain couldn’t hope to process. The sound went straight to Miach’s balls, and he pounced, taking Nick’s mouth in a demanding kiss and giving in to the urge to cover this man and rut against him.
****
Nick found himself buried under two hundred pounds of horny, dominant male. When he’d come onto his mate, he hadn’t expected this reaction, but evidently he wasn’t the only one feeling the mate pull. He knew he’d have to explain it eventually, but right now all he wanted to do was enjoy the feel of Miach in his arms.
At first he’d been surprised by suddenly being tossed on the bed, but when he’d growled and it had turned Miach on, Nick couldn’t have been more thrilled.
He returned Miach’s kiss with fervor. His hands shoved up under the other man’s shirt, allowing Nick to run his palms over hard back muscles and firm ribs. He enjoyed the opportunity to knead the toned skin he’d admired for weeks.
Miach shuddered under his touch, his body writhing and thrusting. Nick planted his feet on either side of Miach’s legs, cradling the man between his thighs. Rocking his groin up, he felt the hard ridge of his mate’s cock rubbing against his own. The friction sent shards of pleasure through his body as Miach rutted against him, seemingly mindless in his pursuit of his pleasure.
Feeling his balls pull tight, Nick knew he was only a moment away from coming in his jeans like an untried cub.


Excerpt from Authors Site Here
Other in the series

Werewolf at the Zoo, Alpha’s Prerogative, Accepting His Animal, Accepting his Human, Finding Balance, Goading the Enforcer, Through Dagus’s Eyes, Casey’s Love Bite, The Wolf Biker’s Mate, Kyle’s Valiant Hunt, A Cajun in Colorado, Catching A Bit Of Irish, Gustav’s Gargoyle, Choosing His Christmas Miracle, The Vampire’s Special Lover, Freeing Demitri’s Wolf, Soldier of Fortune’s Downfall, Just Lion Around, The Mountain Man’s Mate, Crashing the Conicon, The Wolf’s Healing Touch, Rehabilitating his Dingo, Trusting His Rat, Drawing Out His Wolf
Posted by Bronwyn at 12:30 am
Email ThisBlogThis!Share to TwitterShare to FacebookShare to Pinterest
Labels: From the Backlist