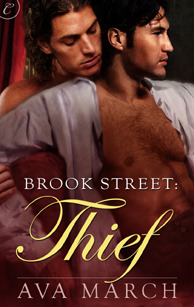 London, 1822 ... It was only supposed to be one night. One night to determine once and for all if he truly preferred men. But the last thing Lord Benjamin Parker expected to find in a questionable gambling hell is a gorgeous young man who steals his heart.

It was only supposed to be a job. Cavin Fox has done it many times — select a prime mark, distract him with lust, and leave his pockets empty. Yet when Cavin slips away under the cover of darkness, the only part of Benjamin he leaves untouched is his pockets.

With a taste of his fantasies fulfilled, Benjamin wants more than one night with Cavin. But convincing the elusive young man to give them a chance proves difficult. Living with a band of thieves in the worst area of London, Cavin knows there's no place for him in a gentleman's life. Yet Benjamin isn't about to let Cavin—and love—continue to slip away from him.

My True Love Gave to Me, Fortune Hunter, Rogues
Posted by Bronwyn at 12:30 am
Email ThisBlogThis!Share to TwitterShare to FacebookShare to Pinterest
Labels: From the Backlist