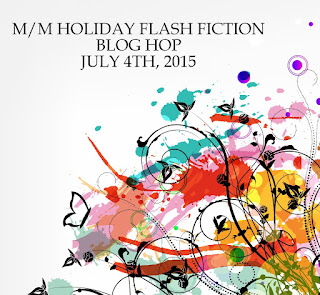 I think I stuffed this one up, but it’s too late to change things no. I’m going to go with the fact that I’m not American and 4th of July is just a date on a calendar to me, and normally in the time when I’m always the most stress as its TAX time.

I say I think because I honestly can’t remember where the link originated from, so I can’t double check and make sure I AM doing it right

Anyway, here’s my flash fiction, hope you enjoy it, even if it doesn’t make the rest of the hop

**
His hand was hesitant, though I’m not sure how you could really call the sliding of a hand over my thigh before cupping my hand hesitant, but I knew it was. I knew it took a lot of courage for him to make that sort of move. There were two reasons why I knew this, one, was that we’d have been best friends for longer than I wish to say, you know, don’t want to date myself or anything. The other was that up until the party last night I’d always been told he was straight.
It wasn’t that I thought it, he’d always told me this. Told everyone, maybe a little too much around the time I’d come out, which in retrospect could have been the reason why he did, but that didn’t mean I hadn’t believed him. Hell, I’d never been given a reason to think he swung my way.
The party, though, as alcohol shut down inhibitions and allowed you to do things you wouldn’t while sober.
His had been a kiss, it wasn’t really the first time a straight guy had kissed me, I hung around a bunch of them, and it was quite easy for them to use me in gay chicken or drunken dares. I didn’t particularly mind, hell most of the time I many have asked for it, without them knowing that’s what I wanted, but my jackoff material got boring after a while and I needed the flesh of someone else on me, even for a minute to help push me over the edge at some nights as I remembered back.
He’s kissed me without a reason, and without a gang of guys watching us. Well, they did end up watching us, because I don’t really think most of my mates were as straight as they’d said they were, but that wasn’t really the point.
We’d had a fun night from that first kiss, one of nakedness and sweat and fluids, that I was sure would be forgotten, or simply put up as a drunken fuck, it was his specialty after all. Instead, here he was, in my car as I drove him home, reaching out, connecting us. Hope bubbled in my chest.
Apparently, he wanted more.
Well, I definitely wasn’t going to complain, after all he’d been the one I’d wanted to kiss me than anything all those years ago.

An InLinkz Link-up
Posted by Bronwyn at 1:00 am
Email ThisBlogThis!Share to TwitterShare to FacebookShare to Pinterest
Labels: Challenge and/or Hop