So let’s get on with it then

His hips started rocking, not getting enough from James’ hold on his cock, but unable to stop them from moving.
His legs opened, sawing, wanting more. Wanting the other man to get over whatever he was doing and just fuck his arse. He wanted, want, want, want!
James worked Sean over, loving on him like no one had before, licking, and nibbling his way across Sean’s chest and down his stomach, not shying away from the hair or odour that lingered against Sean’s skin. It wasn’t as if he could help it, not after being in a nightclub, but James didn’t seem to mind one bit and that small thing... That one simple thing no one but James had ever done made Sean want to cry a little. 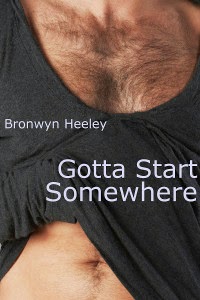 When James got to his cock, Sean was ready to beg. He tried his best to still his hips, he knew he wasn’t the largest man alive—thank God—but he could definitely cause damage if he wasn’t careful.
It was here against his cock, with Sean’s leg’s open wide, his arse clenching and releasing trying to loosen the muscles without any help, but James didn’t pause a moment, he took his time, taking in each of Sean’s hairy balls, fondling the sensitive skin with his tongue before running his tongue lower. Right here where Sean realised this meant something more.
Sean screamed into the wall he used as a headboard, when James’ tongue ran over the muscle of his arsehole. The pleasure was too much, sensation after sensation he’d never had the pleasure of receiving, not all at once, ran along his spine, messing up his head, and if it wasn’t for the painful pull of his balls being removed from against his body, Sean was sure he would have shot. As it was, the half-arsed pleasure of an attempted orgasm ran behind his eyes in short waves.
Becoming needier than he’d ever felt in his life, Sean’s mouth started. Abuse, praise, begging, fell from his lips, all mumbled together, emptying him of everything he was, even if he didn’t have a clue what he was actually saying.