“Oh fuck, yes!” Mike grunted as Schofield swallowed around his cock. The sensation was fantastic. He’d not had a blow job like this in years, if ever.
Wetness ran down his balls, soaked up by hair, making a heated layer that clung to him, adding another coating of perfection to his already rising climax. 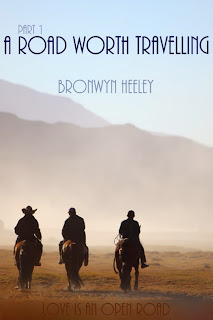 There was a slap of flesh on flesh and a groan, which made Mike shudder as his gaze lifted up off Schofield’s head and into Stone’s face. The man was motioning for him to come forward with the hand that had been gripping Schofield’s hip. Mike leant, knowing they were going to kiss, and liking the idea more than he should. But then what man didn’t fantasise about the porn they watched, and until they had their own experiences, there wasn’t any other way they could get off.
Their lips met, but it was a little more awkward than in Mike’s imagination. Their lips barely reached, and most of the kiss ended up outside their mouths.
Mike’s cock seemed to get engulfed by Schofield, as he moved closer, and the man sucked and swallowed in unison until Mike had no other choice but to pull back from Schofield’s mouth.
Shifting on to his heels, Mike wrapped his hand around his cock and worked the spit as he watched Stone lift Schofield up on to his own knees. They faced Mike, Stone’s cock head a flushed beast between Schofield’s thighs, Schofield’s cock a long perfection in Stone’s hands. Stone and Mike matched pace, stroking in time as Schofield panted. Stone’s voice became a soft murmur, a stream of talk that seemed designed to get Schofield off as fast as possible.
The other man’s stomach contracted, rolling on itself, in a wave that had Mike thrusting up into his own hand. They were beautiful, individually and together.

A Road Worth Travelling, part 1