...the haunted Amun meets a woman who tempts him like no other....

Synopsis
As Keeper of the Demon of Secrets, Amun can manipulate the darkest thoughts of anyone nearby. But when the immortal warrior is chained and isolated to protect those he loves, death is his only release. Until he meets Haidee – a fellow prisoner whose beauty and hidden vulnerability draw him into a reckless test of his loyalty...
Haidee is a demon-assassin, raised to despise Amun’s kind. Yet how can she hate the man whose touch sets her aflame? But to save him she must give herself body and soul...and face the wrath of a powerful adversary sworn to destroy her.

Thoughts
First read: 21/April/11: This book was read before I even had time to breath. Literally I have been waiting for this book since... shit, the last one I read, which was the beginning of last year, I think.
Like all her other books in this series, it was great, nothing better than getting back into that mansion and seeing what’s been happening.
So it starts off start(ish) from the last book, where Amun in clutching his head ‘cause he went to hell and he ended up filled with heaps of demon under lords. And Haidee was drugged and slung over the shoulder of Strider who had caught her as she hunted him.
Anywho, as it turns out Haidee seems to be the only thing that can chase back the demon’s in Amun’s head and with a little trip into hell together they discover a lot more about who Haidee really is and how she was meant to save him.
This one was a heart breaking at the end, even though... yeah, well it’s a romance so of course they were happy but just before the happiness there was heartache. 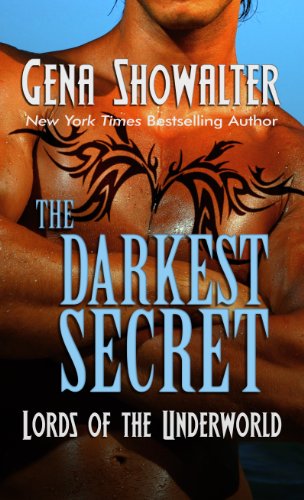 Oh and yeah, we got to learn some more about William, it’s like little bits of his life comes out in all the books, and this one... makes you wonder who he really is.

The second read was much like what I was happening above, but man I love this book. I love the two main characters, they are both great, and even better together.
I like that this one takes us somewhere else, onto hell, and the meeting of characters you don’t even realise are important until they become so.
This book sorta starts the next stage of the series, setting the people in positions so that their story can fall into place.
But just them, together, are great, the story even more so. With heartfelt, and hatefilled. As well as...I don’t know, but I fucking love this book, and the shit it sets the series up for.