I’ve earned my reputation, but if you really did your research on me then you also know that I don’t raise zombies for kicks, or thrill seekers, or tormented relatives unless they have a plan.... Synopsis
I am Anita Bake, vampire hunter and necromancer, and when I meet with prospective client Tony Bennington, who is desperate to have me reanimate his recently deceased wife, I feel sympathy for his loss. After all; I know something about love, and I know everything there is to know about loss. But what I also know, thought Tony Bennington seems unwilling to be convinced, is that the thing I can do as a necromancer isn’t the miracle he thinks he needs. The creature that I could coerce to step out of the late Mrs. Bennington’s grave would not be the lovely Mrs Bennington. Not really. And not for long.

I have been relaxing just a bit with the men in my private life. The affectionate warmth of being with them seems to bring out something softer in me, a sense of safety I can almost trust. They do love me; that part is forever and for sure. But flirting with feeling safe is a dangerous thing....

Thoughts
This one is a novella, if you didn’t already know, it’s set up in the way of a giant answer to a question that ever author gets, (and it’s true, I’ve read proof of this a number of times)
Starting off with an introduction and the question
How do I get my ideas? How do I know it’s enough for a book? How do I work?
It then goes into her giving a little intro into answering these questions and that she’s going to do this with Flirt.

The book, though the very start, and the restaurant scene is so overly done, I understood while I was reading that this was a point, it became even more apparent when you read into the back part (after the book itself).
This one is about Anita turning down a zombie and a deranged man needed that woman back from the dead. 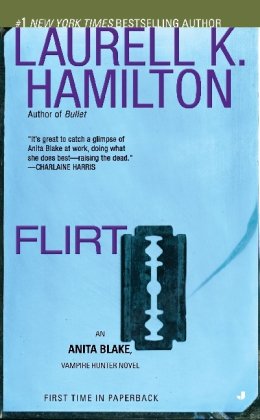 We meet a group of killer werelions and throughout the book she ends up making Nicky hers (it’s not odd; she always gets a new man in each book).
I liked this book, but I think it was because it was quick, didn’t really have anything to do with her other people, though they held a key point, and we get Nicky, I love Nicky, he’s a cute little killer collared.

The ‘Afterward’s then goes the question, she writes an essay on the answer, which, to me, seemed as if she had the consent thought of telling us every step, though it’s not really that detailed, more about the story lines and where they comes from how she explains it, and all of that.
She goes into thoughts and ideas and explanations for the whole series, naming books that she’s talking about threw the whole show.

At the very end there’s a comic strip of the restaurant scene, only it’s like the real deal, her and friends rather than her characters.