Due to technical difficulties (aka, me not having a clue what I’m doing) my plans of having My Kevin available today.
But, thanks to me sister and brother-in-law I have a cover for the book.
Yeah!! 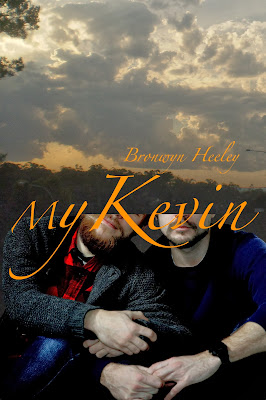 First Excerpt / Second Excerpt
Final Excerpt
Kevin had cornered him after school. It had been two days of not seeing him for more than he had to, he’d kept his distance, which, of course, Kevin was going to notice and worry about.
Kevin had caught him behind the head with one hand, trapping him; making sure Jimmy couldn’t look away. Couldn’t lie when he asked, “What’s wrong?”
It had been the look in his eyes more than the anything that had made Jimmy crumble, but before he’d opened his mouth, Kevin had sighed, taken his hand away and looked out into the distance.
“It’s ‘bout you kissing Kate, isn’t it?”
Jimmy had found it painful when he swallowed. “Yeah, sorta.”
Kevin sighed again, the sound had made Jimmy’s eyes prick up, but he wasn’t really sure he could explain why.
“You like it? You want to date her?”
Jimmy felt his face heat, “no—um, yeah, but no.”
Kevin had smiled. A Smile at something that wasn’t really funny, and yet he just couldn’t seem to completely understand himself. Jimmy had a habit of making him do that, sometimes probably  because he liked that look on Kevin.
“You don’t want to date her?”
“No.” Jimmy was so sure of that fact that the words had come out maybe before Kevin had finished his question. No, he had no desire to date Kate. He had no desire for dating anymore. No one but Kevin did anything for him. And that was the problem wasn’t it? He didn’t want anyone but Kevin, and after that kiss, something had clicked inside his body. Since then he hadn’t been able to think about anyone else but Kevin in that way, no matter how hard he’d try to do otherwise.
Did that make any more sense out loud, than it had in his head? He wasn’t sure, but the principle of it all was, his sexual awakening had hit him hard in the nuts, and the only thing that was able to sooth him, was Kevin.
It was annoying. It pissed him off. And Jimmy seemed to hate everything about it, except Kevin. He wasn’t sure if he could ever actually hate Kevin. Not for anything.
Kevin’s lips twitched again, this time in a real, happy, smile, that had Jimmy’s knees weakened making his legs shift, and his mind dumping in the gutter with all the other thoughts that had his balls tingling.
“Did you not like the kiss?”
Jimmy’s face felt hotter than it had before, his skin seemed to tighten around his chest, fear, making his next breath in pull a little. “It was okay.”
“Okay,” Kevin laughed, “what was wrong with it?”
“Um...” Yeah, Jimmy, what was wrong with it? He only had one word: Kevin. Everything came back to fucking Kevin. Kevin this and Kevin that. He was starting to sweat under his clothes. His heart had picked up, and it was starting to make his mind turn and run. He didn’t know what he was meant to say. Didn’t know what he wasn’t meant to say. He didn’t know anything anymore. Only that he didn’t want to lose Kevin, and he just knew, from the bottom of his toes, that this one moment was going to be when everything changed.
He wasn’t thinking about which way it was going to go. He had only one thought, and that was Kevin, so Jimmy didn’t understand why the voices still mocked and groaned and bitched inside his head.
So, I’m hoping to have this out sometime in the next week.
Posted by Bronwyn at 9:20 pm
Email ThisBlogThis!Share to TwitterShare to FacebookShare to Pinterest
Labels: Cover Art, Excerpts