Me for the Day

The first week is through, and the rest still to come
I’ve spoken before how I thought up this giveaway and took a moment to open it up to others which has had an interesting turn, I’ve never had to organise something like this before, but then it’s not all that hard, and in all honestly I’m weird and like to do those little fiddly bits, even when they frustrate me.
I’m going to take this moment out to talk about the first book I published, My Kevin
I wrote the story to try and get it into an anthology but it ended up not actually being about what they wanted. it wasn’t really anyone’s fault, I couldn’t have helped write it the way I did, and they didn’t want that, lol – anyway, I didn’t submit it, but thought instead to publish it for free as a ‘get to know me’ story.
The idea came from a set of photos on tumblr – though really they’re everywhere, as they are beautiful, or two boys growing up together and loving each other, and that’s what my story is about. Just a simply world, with simple hopes, and love.
Anyway, I’m doing an overhaul on the story, fixing it up while trying to keep the same rough as I think it works well for the story being told, and on the 1st 2015 a second addition will be published through the main retailers.
Anyway, here’s an excerpt from the original version


Jimmy’s head was going nuts; he didn’t know which way was up and which was down. It kinda felt like he’d been dunked by a wicked wave that was churning around him, not wanting to let him go.

Kevin’s hands were chilly on his hot face as he gripped Jimmy around the jaw and turned his face, until there wasn’t anything for Jimmy to do but look at him.
The power those eyes had over Jimmy caught his breath in his throat. He’d never noticed them in that way before. He was now seeing them in a different sort of light.
The emotions, the colour, the presence of them wrapped Jimmy up tight causing his muscles to relax, so that he was able to hold himself up. But he didn’t have to worry about drowning, not with Kevin there.
His mouth was moving. Words poured out of them. Questions that Jimmy just didn’t have the answers too. He couldn’t understand the words that Kevin was saying. His mind was still a mass of panic, and that gripping heat was still trying to claw its way out of his chest, but the rest of Jimmy was ready to lie down and die if that’s what Kevin wanted from him.
Luckily for them both, all Kevin ever wanted was for Jimmy to be happy and not worry about things that just didn’t matter—which pretty much meant everything in Kevin’s view of the world.
This had always made sense to Jimmy when he was in Kevin’s presence but when out of it, when he was at home, alone, he’d had trouble accepting it. Like the world around him had more problems when he had the time to think them through. But, when he was with Kevin he was consumed with just the here and now.
Hot breath and a tender kiss froze up Jimmy’s insides. His head had cleared to a buzzing that seemed to ring between his ears, however hard he tried to pay no heed to it.
This wasn’t anything different. Not the kiss. It was Kevin’s normal way of getting Jimmy to let go of himself; to let go of the worry and the weight that he seemed to always hold on his shoulders.
This time, it was different somehow, however, and it changed them completely. Since his lips just didn’t leave. The pressure seemed to get harder, and Jimmy wasn’t sure if it was from his side or Kevin’s. It took only a second for wetness to leave a slight slickness on Jimmy’s lips as Kevin took over everything, like he always did, and made Jimmy realise what he’d truly been missing when Kate had kissed him.
What he’d been missing in his life, full stop.
Tongue and tongue caressed each other inside Jimmy’s mouth, before taking a short trip into Kevin’s, and then back. Jimmy really wasn’t one to be in charge, but that didn’t mean Kevin was all powerful. He was considerate to a fault—when it came to Jimmy.
The kiss lasted a second, but seemed to go on forever. The world turned, shaped, and shifted around them, without the slightest notice from either of them. It was life changing. But it was also the same as always. Kevin kissing Jimmy to ease the tension, because that’s what he had learnt to do from a young age, to ease Jimmy’s tension. Yet everything in this moment was new, and different, and special, and it would stay with Jimmy until the day he died and no longer able to think about, or remember it any longer.
They had pulled away, their lips still glistening from the kiss. Their eyes were   glazed. Something deep and soft that Jimmy felt down to his toes,  came up, to reflect the feeling from deep inside his heart, or maybe that was his stomach—or his balls, they sure as hell tingled in a way that screamed “notice me!”
“Wow,” was all that Kevin could seem to find. Wow indeed, and to think that one kiss had managed to completely loose Kevin’s ability to think of anything else to say.
But… wow.
Jimmy had felt himself smile. He felt soft and gooey. He felt it in his soul like a bunch of sparkly, colourful fireworks had smashed and burst and flew around inside him, until there was nothing left in him except his happiness about this very moment.
There wasn’t even a moment for him to worry before Kevin’s lips lifted in a smile that Jimmy knew reflected his own, only there was a touch of relief in his own eyes. How long had Kevin wanted this from Jimmy?
A laugh escaped from Kevin’s lips and filled the air around them, before his lips were back against Jimmy’s and the world shut down again and all that there ever was, is, and would be, was Kevin.
Kevin had confessed later that afternoon that he’s been jealous when he heard that Jimmy had kissed Kate. That he had been scared out of his mind because he thought that something might have changed in that moment.
He’d went on with a freeing laugh that he didn’t think for one second that he’d ever had been confused with what he felt for Jimmy, more that he’d realised he wanted something from Jimmy that he thought he  could never have.
There wasn’t anything in Jimmy that wasn’t screaming with joy, at the top of his lungs, he had Kevin! He was all Jimmy’s and nothing, and nobody, was ever going to take him away from him. 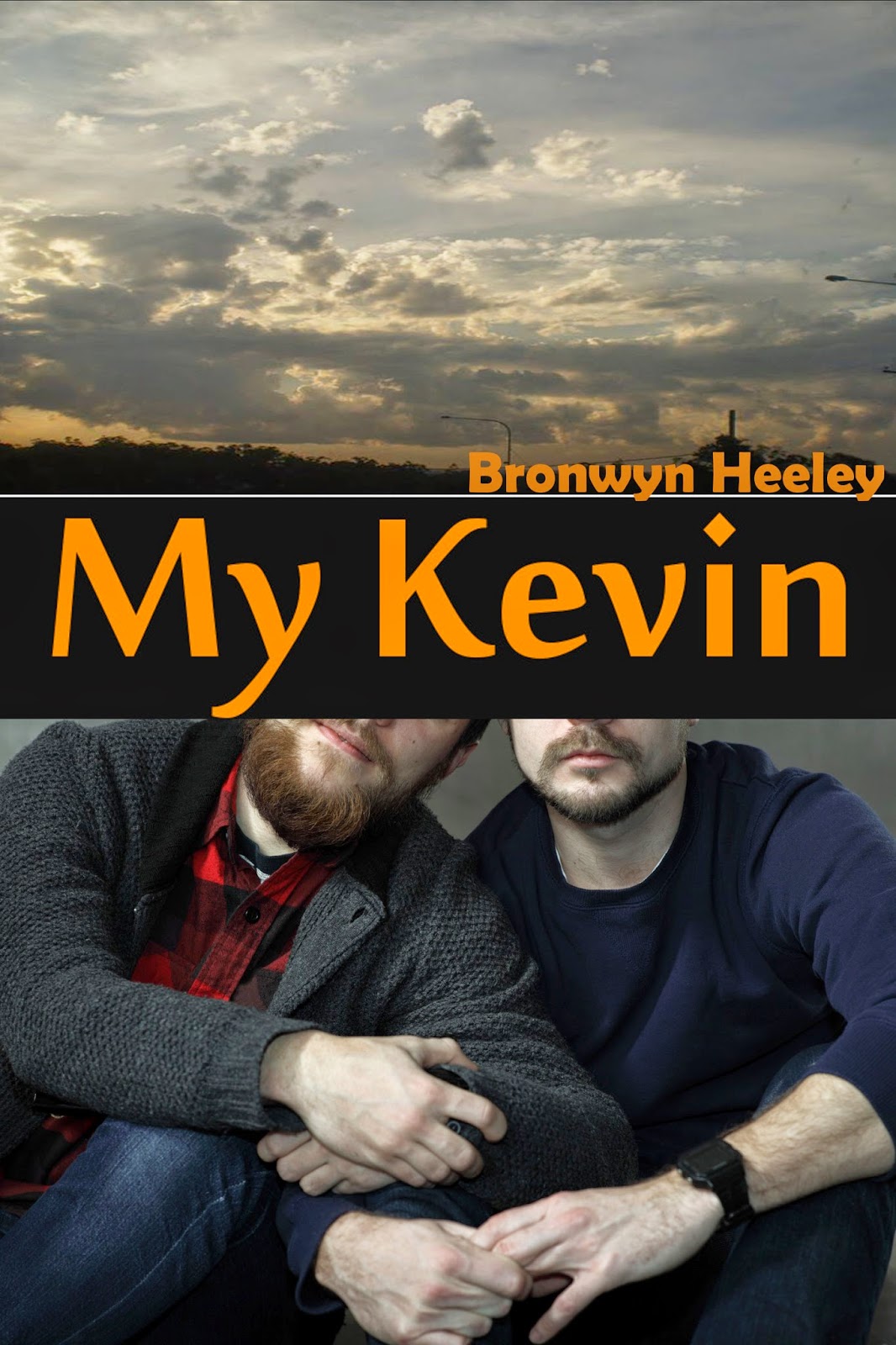 My Kevin by Bronwyn Heeley
Published 1st January 2014 by BonyDee
Contemporary NA LGBT Romance
Life, is what we live. It’s what we breathe. It’s who we love
This is the story of Kevin and me; I’m Jimmy. Our story is not long, and it’s not complex. It’s not something to cry over, and it’s certainly not something to moan about. Our story is simple, and I feel like I have been blessed, being able to grow, live, laugh, and love with the one person I was meant to be with. And it has been that way for as long as I can remember
Goodreads ǀ smashwords ǀ website
a Rafflecopter giveaway
Posted by Bronwyn at 12:30 am
Email ThisBlogThis!Share to TwitterShare to FacebookShare to Pinterest
Labels: giveaway, Plugging this Shit