It’s getting closer, can you all feel it, and for a quick update and to make you crave this story a little more, here’s a second excerpt of April’s new release, and I can tell you, as a BETA reader that it is AWESOME, if you liked the first you’ll love this one – and if you’ve not read it at all, you will love this one.

He looked full on and took in the cowboy hat and matching boots Brian wore. Brian’s wore a pair of chaps and he was shirtless. The chaps completely covered his legs in the front so Greg couldn’t see Brian’s jeans at all.
Greg took notice of Brian’s left nipple, which was pierced with a tasteful gold hop through it. Oh God, Brian dressed like that was making Greg hard. Greg couldn’t take his eyes off the man as he sashayed his way to Greg, standing only inches away Brian said, “I’d like to go riding. Which horse would you recommend for a beginner?”
“Umm . . . probably Smoky,” Greg barely choked out. Greg pointed to Smoky’s stall, which Brian had passed on his way over to Greg. “Umm . . . behind you on the left. Second from the end.”
Brian put a finger on Greg’s chest, as if he was tracing some imaginary circle. “Want to come riding with me?”
Greg didn’t say anything, he just shook his head no.
“That’s a shame. I was looking forward to your company. Oh well.” When Brian turned, Greg nearly swallowed his tongue. Greg got a clear view of Brian’s naked backside.
“Jesus Christ. Just chaps, Brian. Really?” he said under his breath as he took in Brian’s bare ass. It was so perfectly round and smooth. Greg wanted to lick up the crack until he tasted Brian’s sweet little puckered hole.
Leonard came in through the back door, whistling some tone only he knew. Greg ran across the barn and grabbed Brian around the waist. Greg’s front was successfully covering up Brian’s bare ass. Brian let out a little squeal and tried to turn around. His bare ass rubbed against Greg’s hard cock when he tried to turn. “No. Just be still,” Greg said into Brian’s ear. He kissed Brian’s temple almost as if on autopilot. To Leonard he said, “Hey Leonard, I got the barn chores.” 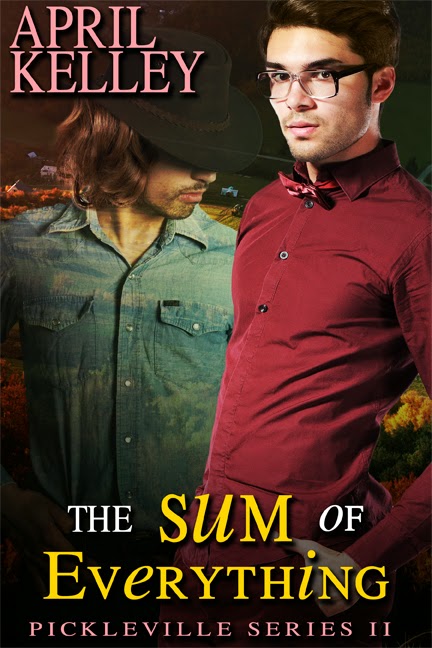 The Sum of Everything
(Pickleville #2)
Contemporary Romance


They say opposites attract but can they make love last?


Greg Mitchell’s entire childhood was filled with violence and abuse.  That was until he came to work on the Heath Farm.  From the first moment Greg met Brian Stockwell he has been in love.  But a threat his father made four years ago has always held him back from pursuing any real relationship with Brian.  That was until he learns his father is on his death bed and no further harm.


Greg finds out his family ties are stronger than he thought.  These ties hold Greg back from really getting to know Brian the way he truly wants too.  Both men discover that they have more differences than they originally thought.

a Rafflecopter giveaway
Posted by Bronwyn at 12:30 am
Email ThisBlogThis!Share to TwitterShare to FacebookShare to Pinterest
Labels: Aprils Interlude, giveaway, Guest