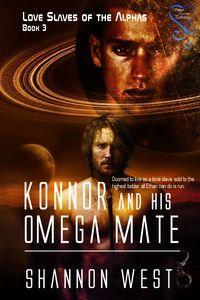 Ethan is having a really bad day. First he’s required by Lycan law to appear before a judging panel consisting of big, important alphas who intimidate him and make him so nervous he’s afraid he won’t be able to perform at all. He’s desperate to prove himself a worthy gamma, so he can get an apprenticeship, and start his new life. When he walks into the room he finds Konnor Balenscu, a handsome, important Lycan alpha, who also happens to be his mate. Ethan is incredibly drawn to him and is amazed to learn that Konnor returns his interest. There’s only one hitch—Konnor finds him to be a lowly omega, deemed mentally defective by the proud Lycans, and doomed to live his life as a love slave, sold to the highest bidder. He only has one option left. He has to run

Most Wanted, The alpha’s Concubine, Reluctant Alpha, Captive Wolf, Wolf’s Bounty
Posted by Bronwyn at 12:30 am
Email ThisBlogThis!Share to TwitterShare to FacebookShare to Pinterest
Labels: From the Backlist