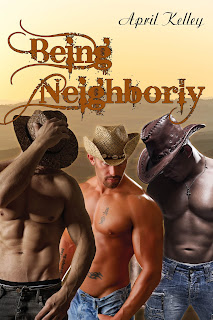 This week's excerpt comes from a short story I rewrote. It’s called Being Neighborly. It’s my first real single title ever. I have always wrote series in the past. The book is available for pre-order on Amazon, Smashwords, and ARe and will official be released on December 20th, just in time for Christmas, so make sure you pick up it. It has M/M/M, romance, and Cowboys!

Isaac sighed and did what he was told. He let Adam turn his face so that he was better able to clean the wounds properly. It took a few minutes and every once in a while Isaac would wince when Adam rubbed the cloth over a bruise or cut. “Sorry, honey,” Adam said now when Isaac wince. “Last one. I promise.” He rubbed gently over a cut on his lip. “You have a sexy mouth. Has anyone ever told you that?”
Isaac blinked up at him. “Um…no.”
“The men you date are stupid then,” Adam winked at him and smiled.
“I don’t date. Not usually,” Isaac said quietly, and immediately wanted to take the words back. This man really didn’t need to know his dating habits. Adam shouldn’t care about it anyway, and while he was on the subject he shouldn’t be flirting with Isaac. Neither one of them should.
It was just a silly little game they were playing, most likely, that would just hurt Isaac in the end.
“Why is that?” Adam asked.
“Because eventually people walk away.”
“That's a sad way to look at things.” Adam pulled the cloth away and studied the wounds on Isaac’s face. “You’ll need ice for the swelling.” He went to the refrigerator freezer and pulled open the door. “Seriously, Isaac. You have no food in this house at all. What have you been eating?” Adam said and looked around the door to give Isaac an incredulous look.
Truthfully, Isaac hadn’t been hungry lately. He shrugged, but didn’t say a word.
“You’re coming home with us,” Adam said in a no nonsense tone.
“No. Absolutely not.” The last thing he needed was to be under the same roof with these two men while they were lying next to each other. He’d imagine them fucking, all night long. He wouldn’t sleep a wink. It would be exquisite torture.

Also visit my blog www.writerparilkelley.blogspot.com every Friday for a sneak peek and what Bronwyn Heeley is working on!
Posted by Bronwyn at 11:41 am
Email ThisBlogThis!Share to TwitterShare to FacebookShare to Pinterest
Labels: Aprils Interlude