“Fuck, you’re hot,” Matt whispered into Jex’s ear, brick scraping against his jaw as his lover pushed him against the side of the house. They were at the main house—Eamon’s, for their very first family Christmas or at least the first with all the newbies. 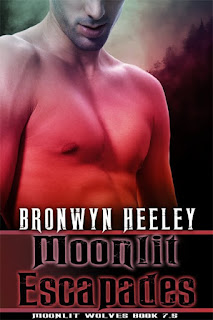 “I was just walking,” he said as he pushed himself back against Matt. The facts were he had only been walking. The just part was where things got fuzzy, but since Matt had gotten him a thick plug for Christmas and he happened to be wearing it, which, standing near Matt, turned into something…more. It probably hadn’t helped that he was enjoying the feel as his hips rolled the thick plastic around inside him.
“Like I said, fucking hot.” He thrust forward, hard, pushing Jex’s body into the wall again, shifting the plug, giving him all the pleasures Matt knew Jex needed.
Jex moaned deep, fingers clawing at the wall, needing…something to happen, for this not to be just a tease.
Then again, Jex knew what Matt needed, too, and made the last couple of hip sways as they got to a place Matt would feel comfortable enough, and hadn’t been just for himself.
Matt’s hands went to his waist, slipping down under the elastic when Jex sucked in his gut. He gave a quick fiddle with Jex’s junk as he sucked at his neck before slipping around to jiggling the base of his plug, causing Jex to moan and rock his hips harder.
“Matt, please!”

Ever wonder how Jex and Matt ended up in that compromising position in book 4? Or what the fight between Phil and Craig was about? Or how about how they all became so close and ended up living together?
Well here’s your chance. All the missing pieces that were linked but not fully explained are bundled together in this heart-warming anthology, and just in time for Christmas, because who doesn’t like to visit from family at this time of year.

Note: series must be read in order, but these shorts can be read separately, they’ll just be enjoyed more as companions.

Coming out 15th December 2015
If you’ve not read the other books in the series, this is a great time

Before I add all the other things I always add, I wanted to let you guys know of a Christmas Present Giveaway I’ve got going on. Just pick a few books of mine you’d like and by Christmas you’ll receive at least one.

Readers, please visit us at our new Author Central where we’ll be sharing even more from our authors besides Saturday’s snippets. We’d love to have each and every one of you there as we’re starting things this week and hope to bring you lots of fun and even some prizes along the way.