Week 120 theme is A Sexy Galaxy

The only sci-fi thing I to show off (that’s already released, at least) is from a competition I submitted, and was published in. 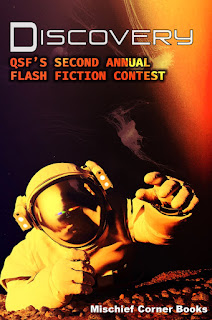 Jesse swallowed down lungful after lungful of foggy, clogged air. It was hard breathing, but that would change, it would all change, or rot to hell. This early in the game, anything was possible.
“It’s working!” he shouted finally taking his eyes off the sky as the darkness seemed to recede and the sky became something close to what Earth witnessed.
“We did it,” he smiled up into a handsome face, strong, square with a dark shadow gave him a dirty look that already made Jesse want to touch. His best mate, the one that was with him every step of the way, the mechanic to his madness.
“You did,” Thom’s smile was odd, and it became odder the closer to Jesse’s he got.
Lips touched his, a soft brush, a light scrap of beard sparked tingles all the way through him, lighting him up. He pushed closer, got in nice and close, forgetting he shouldn’t.
Jessie pulled back, looking up into that face, that wonderful face and before panic could set in Thom smiled, and wonder filled Jessie.

The rules are simple enough. Write a complete story—either sci fi, fantasy, or paranormal. Make sure it has LGBT characters and/or an LGBT vibe. And do it all with just 300 words.

The stories in this volume run the gamut, from platypus shifters to alien slug monsters, from carnival horror stories to haunting stories of ships with souls. There are little jokes, big surprises, and future prognostications.

Readers, please visit us at our new Author Central where we’ll be sharing even more from our authors besides Saturday’s snippets. We’d love to have each and every one of you there as we’re starting things this week and hope to bring you lots of fun and even some prizes along the way.