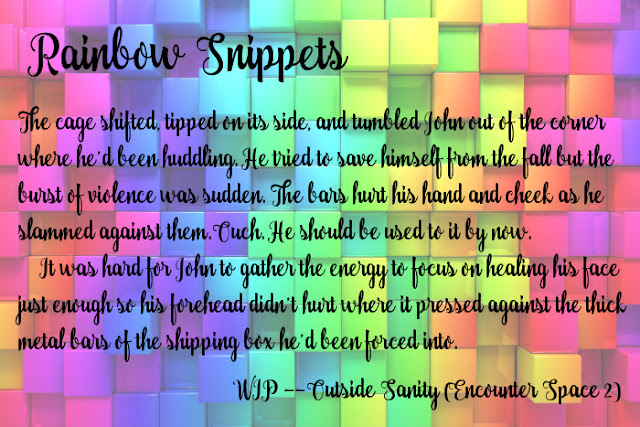 click here for the group this snippet is linked into

So for me, and writing, this week brings about it a rush of needing to get everything finished.

I just send back 2nd edits for Outside Sanity. It’s now only got to go through another proofing edits and it’s set to release on schedule. Which is great.
My Outside My Inside will follow shortly after, but it’s not as important to get out asap.

Being That For You has been pushed back because we aren’t in a rush, and it’s needs a lot of work. This one is something I wrote before submitting Loved by a Werewolf, so I understand the amount of work its going to need. A lot of OLD mistakes in that one.

This week I’m going to be working on The Way Life Turns. We have BETA edits and pretty much trying to line the characters up better which I have good hope in achieving tho I still have the fact that I believe our styles are two different that even if I scrapped my part and re-wrote it to make April’s that they’d still seem like four different characters. However I will try my best and we will deal with the consciences of this.
Really it’s a learning curve of us and it shows that we won’t be able to actually co-write anything. This however has let to 2 very different and equally awesome ideas that you’ll hear about later in the year.

I also have to finish M-PREG 2, because I’d really like that one to come out in the beginning of the year and the only way that will happen is if I submit it before this month is out.

And that’s it for this week. I’m hoping I can get it all done, and I have hopes that I’m able to, really, I can work on one during the day and the other at night. Or just work on one and hope it only takes a day to finish and then the rest of the week I can write m-preg.

Saying this I do still have my kids home on school holidays so I might not be able to get both done. Just do one at night and then the start on the other when I’m finished.

Didn’t I just say that?

Anyway that’s it for me this week, what’s your plans??
Posted by Bronwyn at 12:30 am
Email ThisBlogThis!Share to TwitterShare to FacebookShare to Pinterest
Labels: Yapping My Gums