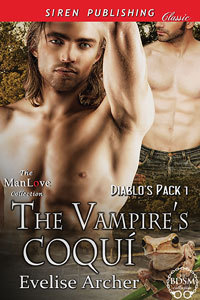 Diablo loves his ranch, his horses, and the men he works with. He also has certain proclivities which the C & L Ranch caters to. Diablo is a Dominant and a one hundred and fifty year old vampire who desperately desires a mate and permanent sub.
Newly graduated from Veterinary School, Kristoph Karlisle answers the Vet Needed ad for the C & L Ranch. The little coquí shifter is better suited for the warmer climate and eagerly heads south towards a new job—and his fated mate.
Diablo hopes his mate is as open-minded as the other residents of the C & L Ranch, where hog tying takes on a whole new meaning.

Kristoph’s heart skipped a full beat or maybe two and the sweat trickled down his back at the bomb just dropped on his lap. The polo shirt began to stick to him and he hoped his deodorant did the job. Diablo Rivera-Calderon was an imposing figure of a man. Sexy, wore a pair of jeans as if they’d been painted on, Kristoph’s new boss, and oh yeah—his mate. Never did Kristoph think he’d move hours away from his current home not only for a job but also to find his mate—life mate as Diablo called him. Coquíes did not necessarily mate for life nor believe in life mates. They knew mates existed and from the moment Kristoph laid eyes on Diablo his scent called to him and he knew the attraction strong, but a life mate?
Usually coquí unions were arranged by the parents or some older relative for the sake of procreation and keeping their shifter population thriving. They rarely mated outside the species. Kristoph’s parents were a perfect example. Their marriage had been arranges and they brought six children into the world. Unlike their animal counterpart which laid up to twenty five eggs per year, the shifter coquí usually had a child every year and a half. Kristoph sometimes wondered if they only stayed together out of habit, and because it was expected He certainly didn’t think they loved each other and when they tried to arrange a marriage for him, Kristoph left his island home of Puerto Rico for the sunnier pastures of Florida. Unfortunately, or maybe fortunately, a scholarship from the University of Pennsylvania to study paid off in more than one way. The weather may not have been what he’d originally sought, but now relocating to Virginia…
Confused, Kristoph wondered if all the ramblings of his parents about survival and procreation was just their way to keep him in line, especially once he told them he was gay. They were appalled and screamed it was his duty to marry a nice coquí-shifter girl and keep the species thriving. Once his parents informed him they had an arranged marriage for him, Kristoph left and never looked back. Lies. Everything they told him—lies.
“I don’t know if I believe in life mates.” Kristoph had a hard time looking Diablo in the eyes. He already didn’t want to disappoint his mate. “My parents always told me coquíes married for procreation, rarely love. We only bred with each other.”
“Cariño, I can’t speak for your parents, but I can sure as hell tell you with one hundred percent assuredness, you are my mate. A vampire’s nose is never wrong, nor hearing, and you smell like sunshine and sea salt.” Kristoph kept his eyes transfixed on their joined hands and the slight caress of Diablo’s finger on his wrist.
“But what if you’re wrong and I’m not the man for you. Are you even gay?” whispered Kristoph.
Slight pressure on his chin forced his face up, and he peered into Diablo’s eyes. Kristoph saw Diablo’s dark pupils dilate with conflicting emotion, understanding and lust. Kristoph inhaled before speaking again. “Are you? Gay?”
“Yes, I am, but even if I wasn’t, a mate is a mate. And we never forsake a mate. Do you understand what I’m saying?” Kristoph timidly shrugged his shoulder at Diablo’s words. “You are it for me, Dr. Kristoph Karlisle. My life mate. And no matter how long it takes, I will prove myself to you.”
Kristoph watched the man’s plump lips as he spoke. A shudder passed through Kristoph’s body at the inflection in Diablo’s voice. The man was determined to convince him of his sincerity and tenacity of their mating. A surge of pride flowed in Kristoph, knowing someone thought him so important. Kristoph licked his lips, his throat dry like the Sahara as he swallowed. He needed a drink of the lemonade but he feared moving, not wanting to break the spell.


“One of us is a tad bit overdressed.” Kristoph sat transfixed at the beacon—Diablo’s dick—that led the way to the bed. Brought out of his trance, Kristoph found himself yanked to the foot of the bed by his ankles. A sharp claw protruded from Diablo’s finger and swept up one side of his khakis and down the other, underwear included. Clothes ripped off and naked from the waist down, Kristoph suddenly felt very vulnerable.
“Diablo?”
“I’m sorry, cariño, but I couldn’t wait any longer. I promise to replace the pants.” The bed dipped, Diablo’s body surrounding his as he crab-crawled to the head of the bed.
“Shirt, please, unless you want to lose that, too.” Kristoph whipped the polo over his head and unceremoniously tossed it on the floor. Naked, his tan skin was a contrast to his pale lover.
“Beautiful.” Kristoph smiled at Diablo’s compliment.
Kristoph’s flesh goose bumped as Diablo’s wicked tongue grazed across each nipple and down his sternum to his belly button. An unmanly giggle escaped as that tongue dipped into his belly button and swirled. Oh, to have that killer tongue on his cock.
He was soon pleasantly surprised when Diablo lapped at the pre-cum pooled on the tip of his dick.
“Oh fuck, Diablo. Please, Sir.” The honorific slipped from his lips so easily. To have a master as special and sexy as Diablo made his heart soar.
Kristoph wanted to scream the slower Diablo licked him, suckling his balls and then dipping his tongue into the slit of his bulbous head. Diablo repeated the action and Kristoph searched for all the patience he could muster. He scrunched his eyes shut and tightly grasped the sheets. Movement made him open his eyes and he peered up, face to face with Diablo’s green eyes.
“Let’s take the edge off, or I can guarantee once I get into your tight ass, I won’t last long.” Kristoph shuddered, the feel of his mate’s body aligned next to his, combining their sweat and masculinity. Moving to his side and sliding down slightly, he lined his cock next to Diablo’s. The vampire’s large callused hand wrapped around both their dicks. The pre-cum, which oozed from the two slits, eased the way for the man to stroke them effortlessly—up and down, twisting the knobs ever so slightly, catching more of the drippings.
Kristoph panted, his breath ragged and mouth agape. Moans of pleasure emanated from him as the hunky vampire brought them close to completion.
Timing the movement of his hips with the slide of Diablo’s hand, his cock skimmed along the velvety steel of Diablo’s dick.
“Close, Diablo, so close.” As if the man knew just what he needed, Diablo’s pinky pressed into his slit, creating a volcanic eruption of cum. The vampire continued to milk both of them, Diablo’s orgasm mere seconds behind. Their combined scents and spent seed covered their bellies. Diablo’s rhythmic circling of their cum on Kristoph’s stomach brought forth a faint smile and chuckle.
“That was…nice.” Kristoph turned his head into the crook of Diablo’s neck and kissed him lightly. “I don’t think I’ve ever come so hard.” He felt safe in the strong sinewy arms wrapped around him like a protective covering.
“You know, I do need pants, though, before we go downstairs to eat.”

Diablo was a happy vampire. Light snores and wispy breaths came from the man presently relaxed and asleep in his arms. His mate. The only thing that would make this moment better would be if Diablo had fucked and bitten Kristoph, sealing them together forever. Soon enough.
Diablo nuzzled the top of his mate’s head. The tendrils soft against his face, his hair smelled like coconut with the underlying scent of sunshine.
His little coquí had a beautiful body, sleek and compact. The man couldn’t be taller than five feet seven inches. Only a slight hint of his island ancestry, his skin radiated peaches and cream. He twirled his finger in the long shoulder-length shaggy blond hair—streaks of chocolate brown sporadically placed.
“Hey.” Kristoph’s sleep-ridden voice whispered across Diablo’s collarbone. “I must have dozed off.”
“No worries, cariño, I’ll never balk at the chance to have you in my arms. How about we wash the dried cum off and go eat. Then we can discuss our true mating.”
“Perfect.” A quick shower, a change of clothes, and now the forgotten dinner.
Diablo reheated each of their plates, and they ate side by side in companionable silence. The last plátano eaten, Diablo pushed his dish aside and reached for Kristoph’s hand.
“When we mate, I’ll bite you in the neck and suck your life’s blood—just enough until I can feel you in my system, as my seed spills into you. Then I’ll bite my wrist, and let you drink from me. We’ll feel our beings, our souls melding into one, and then our mating is complete. My parents are life mates, and they’ve always told me it’s an intensely satisfying and erotic experience. We’ll feel each other wherever we are, together or apart. We’ll be able to communicate mentally.” Diablo waited for a few seconds to allow Kristoph to take in all he said. “Are you sure this is something you want?”
Diablo noticed the intensity in Kristoph’s eyes as he spoke. “Yes, Diablo, I want to be mated to you for life. With all that it brings.”

An avid reader and story teller, wife, mother, grandmother, and educator, Evelise is living her dream with her loving husband, two dogs, and three children who visit often. Fueled by desire for a strong cup of coffee and a passion for literature, Evelise can be found reading her favorite books on her e-reader or in front of her lap top spinning her next tale.