Me Me: Taking A Stand 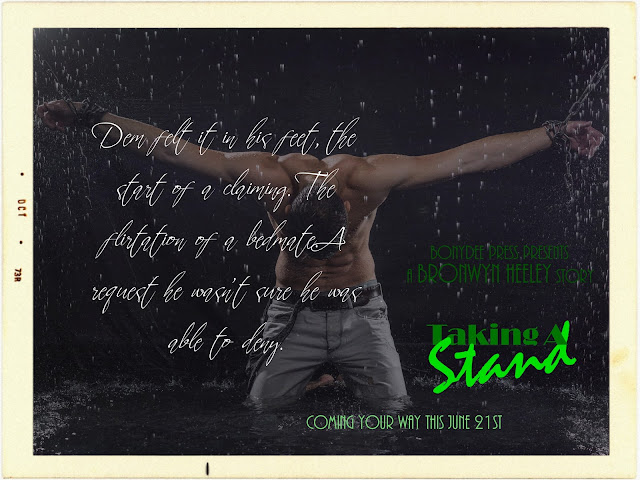 One Werewolf. One Vampire. One night.


Dem lives in a world ruled by two things: the moon and his alpha. Something inside of him has always yearned for more, and a chance encounter with a vampire helps Dem realise what he craves. Now that Dem knows what he wants, is he strong enough to reach out and take it?

I know it doesn’t seem like the best time to talk about this, but the thing is I already know your number one question you’ll have when this is over. This is mostly because of the way I write. And even though I actually had a word count I had to stay under (as this was written for an anthology it never ended up in). However though I would call it a HEA it’s probably actually a HFN.

And I may already have the few people who have read it screaming for more.

So I thought I’d tell you, simply at least, what’s happening next for the series, so it’s out there before you need to ask.

The next book is back in Raven’s Chance and is going to be about rope play and edging, the paranormal creates as still being worked out, but I’m thinking at least one will be a succubus. But I’m not quite sure how it’ll all work. This is a much tamer one of the book, because it’s much more…placid characters. But it’s about the need. The excitement. The objects of lust.

The book after is back at the werewolves stronghold. This ones is about power. Alpha verse Alpha. This one is going to get violent, you’ll understand once you’ve read the book

THEN, even though it wasn’t planned I will give you Dem and Jeffery’s real HEA, I’m not sure how it’s going to happen, I’m not sure what it’s going to be about, maybe more on Jeffery and his kinks, I honestly never really thought about writing this story, but I can see why people would need it. I also love the world, and those two characters enough, even after all this time, that I wouldn’t mind getting back into their heads.

The ones after are in the world but not really a part of the first story so we’ll talk about them when it gets closer.

On that note, these will take a bit for me to write them. I’m hoping in 2018 you’ll have all I’ve listen, but these books are hard to write. They are written in a particular way that I want the whole series to have, and therefore …yeah, anyway, there finished enough for you to be satisfied until the next one, but so you know getting to them. You’ll eventually get these story, sooner than later but maybe not as soon has you’d hope
Posted by Bronwyn at 12:30 am
Email ThisBlogThis!Share to TwitterShare to FacebookShare to Pinterest
Labels: Plugging this Shit