So as you might understand last week happened to hold my b’day. Yeah, I love birthdays, love that it’s your day and everyone that loves you thinks of you in that one day, if only breifly. But last week was mine and now I’m a tall and sure 26 year old.
Anyway, enough with the boring shit, let’s get on with the bulk of birthdays....the presents.

My sister and boyfriend bought me tickets to see the Jezables on the 9th of June at the (name) with (band names) it started at 7pm
I have wanted to see them since, well ever, and the last time they were playing I couldn’t go because I was on holidays at that time. Which sucked. It was also the birthday present that I was tested with the most, because she’s known and bought the tickets when they first went up.
But to end it all, it’s a present, a concert and a night out all for my birthday because it’s this weekend rather than tickets for something that’s happening months from now.

OH.MY.GOD!!!!! The fucking Rock! Really people of the world, it was AWESOME. Words can’t describe the greatness of the night. I’m buzzing ‘cause of it, buzzing and shaking to a point that I can’t believe that I went.
...okay, so we got there bright and early, mostly because my sisters man wanted to see Snakadak and they were first up—they are great, by the you should check’em out—followed them were Lights, she’s was okay, though it’s been a puzzlement from the time I went and saw Little Red as to why they put on a full electrical band in the middle of instrument ones. she was out of place and because of that I didn’t particularly enjoy it.
The Jezables came on, on time, the croud packed it in.
It was a sold out last show and they didn’t disappoint. Neither did the couple that were sitting in front of us. They were so cute, all cuddly and shit threw the show, like it meant something real special between the two of them. Cute. They were even making a song list of the night.
The lights, sound, and general performance of the four of them was great, I enjoyed it so much that I’m still shaking well after the show.
I can’t say it was my favourite, because it wasn’t and I’m still tossing up whether or not I prefer to be seated or standing in the crowd. At the time of the music I missed the mash of people in my space, but afterwards, making the way back to the car, my general energy and ability to walk was much better than previous concerts.
Whatever, we get what we got and I loved the whole thing.
Now I’ve only got two more to go and see to be up with my sister!
It was killer, I loved it, and...and....ahhhhh!

From my family (and I’m talking defacto and kids) I got an iPad2, yeah, it’s not the newest but it’s the cheapest at the moment and I really want it for reading because with it being as cheap as it is it seemed stupid to get a kindle or nook, when I could get an iPad.
I got a few ebooks when the internet actually decided to start working for me. But it wasn’t what I wanted or hoped for, but that’s life, ain’t it. I might just have to save up some more money (so no more books for awhile) and get me the other one, then it won’t really matter, ‘cause I have them both!!!
They also got me Kiss the Dead by Laurell K. Hamilton, but I got this a few days later.

My parents. Mum bought me (put here) which she got from her travels in Bhutan which she and my sister have been on for the last two and a half weeks.
My dad built—yeah, built—me a book case and it’s fucking awesome. But don’t take my word for it, have a look..... 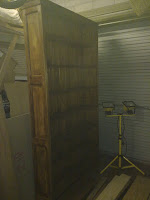 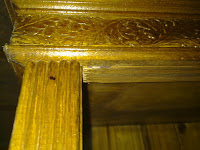 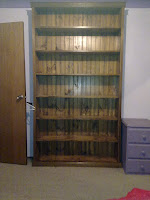 How awesome, and my dad made it all for me. So cool, and consider this. Apparently in a shop (in Australia) I would be looking at $800 of so for something like it. But that’s not adding the fact that I got dad to make the shelves smaller than most because there only for books, and it’s got seven of them....the thing is freakin’ huge.
Anyway, I love it! Really love it!
I’ve actually loved everything I got, it’s been one of the better years for gifts because it’s been things I’ve wanted, needed and surprises that have rocked my world!!!!!

And then, on the nice and clear Sunday I woke up sick as a fucking dog. And it’s only today that I’m able to actually sit at the computer for longer than ten minutes, along with an ability to think of what I’m meant to be doing while here.
In that time, though, I have read 6 books (on happened to be only 40something pages, but still, a book), they’ll all go up in the next couple of weeks, when I can get my head fully right to organise and maybe even re-read a few to have it all fresh. It’s actually fogging my head up to have so many books read so fast. I don’t know how people do it all the time. Though I’m sure you’re not sick, and if I wasn’t it have worked out better, since I would have jotted down some thoughts or even written up a full review after each book.
My fav, and the one that I have read and read and read again, just ‘cause it’s that good is, With Caution by J. L. Langley, but I’m fast becoming a fan of the series, if I’m not already.

Posted by Bronwyn at 3:01 pm
Email ThisBlogThis!Share to TwitterShare to FacebookShare to Pinterest
Labels: Yapping My Gums