There isn’t much to say about this particular author, mostly because as far as I can see he’s quite new to the whole industry, only being involved in two anthologies


A Taste of Honey anthology and this one he’s offering for the prize.


It was New Year's Day, 1986, an hour after midnight, and it was the end of things for Heath.
Or it should have been. It was also the night he first met Finn.
A chunk of old cement crumbled away beneath his feet, falling into the river far below. The bridge railing was cold at his back, and he could see his breath in the midnight air. The water of the River Severn rushed by beneath him, silver in the moonlight and heavily laden with winter rain. As soon as he gathered his courage, Heath[Gabriel B1]  would take his own life into his hands, for once, and would leap into those icy waters to disappear forever from the world of men.
Just two hours before, he'd been over at the Sullivans' house, at a New Year's Eve party thrown by the parents of Sam Sullivan, Captain of the Havenwood sixth form school football team.
Heath hadn't wanted to go, but his mother had insisted. She'd sat down with him at their kitchen table in the small cottage that was all she could afford since his father had left them. She was fading slowly with the years, like the flowered tablecloth she rested her elbows on.
“Heath, I know it's not easy for you, socializing with those other kids,” she'd said, brushing a strand of his long blond hair away from his face. “Seventeen is a hard age for anyone, and you’re not like them.”
Heath was average height, and still carried some of his baby fat. He'd had a bad outbreak of acne when he'd hit puberty, and it still flared up every two or three weeks, leaving his face looking constantly bruised. And he was gay, a big deal in a small English country village like Havenwood.
“But you have to start somewhere.” Her voice was hard as steel. ”I want you to go to this party tonight and enjoy yourself.” She adjusted her skirts, smoothing out the fabric. “Who knows, maybe you'll make a new friend.”
How could he say no to his mum when she put it like that?
So he'd gone, hoping to make the best of things, and it had all gone horribly wrong. Now here he was, all alone, humiliated, and ready to let go.
The fog roiled along the edge of the river, as if waiting for the perfect moment to surge across the turbulent surface, smothering everything in a thick, white blanket. He loosened his grip... 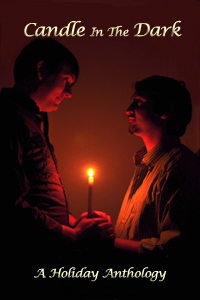 In almost all traditions, winter has been a time to huddle around the fire and be thankful for those the fire is shared with. The holidays grew out of a need to celebrate that time, from Christmas to Chanukah to Solstice. The longest night of the year has always held some special mystery, and we’re proud to present you with several stories of how those mysteries bear fruit.


Inkstained Succubus ǀ Goodreads
a Rafflecopter giveaway
Posted by Bronwyn at 12:30 am
Email ThisBlogThis!Share to TwitterShare to FacebookShare to Pinterest
Labels: giveaway, Plugging this Shit