A Little About Ellen Cross

Another Australian Ellen writes Paranormal Romance with her main focus for the last year being to her Preternatural Rescue Centre series. It looks fun, and though I do own the first book, it’s with a sad heart to say that it has sunk into the debts of my TBR pile and forgotten about until this very moment.


It’s the thing with books, so many new ones, not enough time, and if you forget, you forget, which is sad as with the first time I saw the book I was intrigued by the idea, and wanted to read it, but I’ve sadly let a lot of series slide, old and new.


To me it seems like a very traditional paranormal series, which was the pull I had to it, as I’m sure it’ll be for everyone else. it seems fun loving and gripping and something to read when you need a bit of paranormal in your life.


it’s what I’m seeing, it’s what I’m hoping for from the reviews I’ve read off a couple of the books, but my reading buddy hasn’t even read them so I can’t even ask her what she thought. They generally seemed loved by all those who have read them, and that’s a great thing, and I’m certainly wanting to pick it up again and have a read.


And to leave you all with a wee excerpt


Catcalls ripped through the air as the young man slunk to his knees, crawling to the throbbing beat, as he allowed the men crowding the edges of the stage to slap, pinch, and grab at his ass. He rose to his knees in front of Gray, surprising him by leaning over and wrapping his fists in Gray's shoulder-length ebony hair, pulling him forward, right into his groin. He rubbed Gray's face against him, and the scent of the smaller shifter's musk filling his lungs made him instantly hard, uncomfortably filling his jeans, as his body reacted to the delicious pheromones. A guttural groan pulled from deep within his chest and he automatically reached around to pull the man closer. The little wolf chuckled—red wolf if his scent was anything to go by. Far smaller than Gray's own breed...not that he let that little titbit of information let loose often...well, never, actually. The less the population knew that his breed still existed, the better. 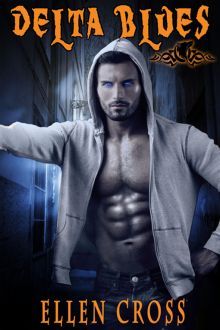 
In a World where the Alpha are the law, Beta the order, and Omega the knowledge…the Delta have become the oppressed


The night of Samhain is fast approaching, and for that one night a year, Gray and the last remaining Dire Wolves—amongst others—are entrusted with the protection of the veil between worlds, while it’s at its thinnest. Add in the threat of a new drug on the market, and they’ll have to work twice as hard to keep everyone safe. The last thing he needs is a sexy little Delta to save.


As a lowly Delta, Red Wolf shifter Ryan has never known peace. Cast away and unwanted, he is quickly taken captive and trained as a dancer at The Howling, a strip club in the worst part of Praeter. Hungry, abused, and kept in a drug-induced fog, his life is nothing. He is nothing but the orders and twisted demands of his captor. All that changes when he catches the scent of a wolf in the crowd.


Long ebony hair, eyes that can’t decide if they’re green or blue as they follow him on stage. Unable to stop himself, Ryan does the one thing guaranteed to earn him punishment. He touches the other wolf. Peace. For those few brief moments, the hunger, the pain, the torment…all gone. The price to feel that respite again, though, could very well be his life


Extasy ǀ Goodreads
a Rafflecopter giveaway
Posted by Bronwyn at 12:30 am
Email ThisBlogThis!Share to TwitterShare to FacebookShare to Pinterest
Labels: giveaway, Plugging this Shit