Ok, so no, this isn’t a guest post, as people are busy, especially this lovely lady as she’s organising 2 other things at the moment so I’m just going to spread some praise myself. (and so you all know, this is going to happen a lot, Christmas time is horrid for these sorts of thing, which is why I haven’t asked for them to write me something up, they only did if they already had a post in waiting)


Beany is giving away the first book in her Paws and Magic series, which is about a group of dog shifters who ended up getting kidnapped by wizards.


Aiden’s Shepard, which is book, one, starts with two bad guys losing one of the dogs who happens to be the MC of this particular book. Aiden whose grandma died is all set to leave home the next morning when he hears the search and finds the dog, and thus starting our journey.


It’s a simple, straightforward book, and I liked that, as it sits well with the romance end because that’s what it was, a romance, about two men and trying to find their way to happiness when everything else in their lives is a mess and it’s not looking like it’ll come out any time soon.


And on that note I’ll give you an excerpt from said book, though I’d like to put in, if you can, you should read book 2 right off this one as that’s how it’s written.


He stood near the table, breathing heavily, stopping himself from opening any of the curtains to peek outside to see if the van was still there. Aiden had no idea what he was thinking with this stunt, but something was telling him to protect the dog. He just had to figure out how to clean the canine up without getting attacked, bitten or turning the light on and revealing to anyone who might be outside that he was awake and moving around.
Aiden took a deep breath to try and calm down, then gathered his courage. He took a few steps toward the entrance of the kitchen to see if he could make out anything through the glass panels on the front door, trying to stay hidden from view. He couldn’t see anything at first, but as he kept looking he suddenly spotted the shadow of a man through the glass. He couldn’t turn around and put his back against the wall fast enough, breathing hard once again.
Fuck! I hope whoever that is didn’t see me!
“What the hell are you doing?” A male voice came from outside his door. The man tried to remain quiet, but he was just loud enough for Aiden to hear him.
“I’m looking for that mutt, what do you think I’m doing? Picking daisies?” replied a second male voice in the same hushed tone.
“What makes you think he made it all the way here? It’s not like there’s a blood trail leading to the front door!” the first man said, sounding angry.
“This is the closest house so I’m going to check,” the second man said, then tried to turn the handle of the door.
Aiden felt his breath catch in his throat. He knew he’d locked the door, but if they forced their way in and looked around, what would he do?
“Knock it off, you moron. That mutt was barely breathing when we put him in the van, and you think he not only got up and made his way to this house, but that he somehow got inside it, too? How stupid are you?” the first man said.
“I’m telling you, man. There’s something about the mutt that doesn’t sit right with me.”
“You’re just pissed because he managed to bite you. Now come on, let’s get out of here before someone notices us or the van. We’ll come back later in the morning and have a look around. If the mutt managed to find someone to feel sorry for him, they’ll probably take him to see a vet, then we’ll get our hands back on the beast.”
“Yeah, I guess. Alright, let’s go.”
Aiden listened to their steps as they walked off his porch and presumably made their way to their van. He breathed a sigh of relief when he realized they’d left.
There goes my plan to get the dog to a vet close by. Hopefully there’s nothing seriously wrong and he’ll be able to hold off until I can get us to the cabin in the morning. 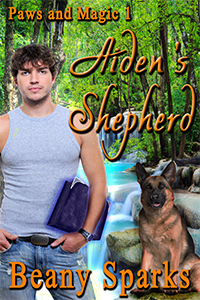 
A man who never knew magic and shifters existed gets a crash course when he saves an injured dog.


Aiden Grey is packed and ready to move and start a new phase of his life away from the family that kicked him out when he was eighteen. The night before he leaves he sees something fall out of the back of a van. Upon closer inspection, he is shocked to find that it’s not the bag he suspected, it’s a dog!


He decides to take the dog with him, and the two set off the next morning to Aiden’s new home. Everything is going well for Aiden and the German Shepherd he named Lex. That is, until said German Shepherd shifts into a man who claims Aiden is his mate.


Lex can’t believe he’s finally found his mate. But as happy as he is to have him, he still worries about his brother and pack, and where they have ended up.


With the revelation that shifters exist, secrets about Aiden’s past come to light. Secrets he didn’t even know existed. Suddenly, Aiden has to deal with not only the reality of shifters, but also ghosts and magic. But with Lex by his side he can handle anything—even his surprise guest.

a Rafflecopter giveaway
Posted by Bronwyn at 12:30 am
Email ThisBlogThis!Share to TwitterShare to FacebookShare to Pinterest
Labels: giveaway, Guest