Hi, my name is Penny, and I now live in Australia, but I grew up in England, so Christmas is quite different, mainly because of the seasons. Though a lot of traditions are the same, I think moving from one country to another can be a bit of a culture shock. David, from Murphy’s Law certainly thought so. Here's what happened on his first Christmas in Australia.


“What do you think?” David stood on the ladder, precariously balanced on the second to top step as he readjusted the star.
“I think you should get down.”
Scott’s frown had David sighing. “I’m fine. I’m only three feet off the floor.”
“I know, but that’s enough to break an arm or sprain an ankle if you fell.”
If it hadn't been such a possibility, David would have come back with some sharp retort. He hated being reminded how much of a klutz he was, even if Scott had every reason to be on guard.
Ignoring the worry on Scott’s face, David once again pointed to the star. “Well?” he asked.
“It’s beautiful, but I don’t understand all the fuss.”
“Fuss?” David twisted, glaring at Scott as the man instinctively put out his hands to stop him from toppling off the ladder. “You know this is my first Christmas away from home.”
“I thought this was your home.” Scott's frown deepened.
“You know what I mean. An English Christmas is so different from an Aussie one.”
“Of course it is. We’re in opposing hemispheres. It’s cold up there, and warm down here.”
“Warm?” David used his forearm to wipe the sweat off his brow. “It’s forty degrees outside.”
“Which is why we’re inside with the air conditioning on.” Scott’s pragmatic point of view frustrated David because Scott just didn’t get it.
David was used to days curled up in front of an open fire, with a mug of hot chocolate while wrapped up in a soft blanket. Granted, being wrapped in Scott’s arms while sitting on the front porch and having a cold beer wasn’t bad either, but it just didn’t feel like Christmas. Here he was greeted with Galahs and Wattles, not Robin Red Breasts and Holly Bushes. In England there would be snow on the ground, and the air would have a crisp sharpness to it that took your breath away. Whereas the heat in outback Australia was hot and dry, and everywhere was covered in red dirt.
Knowing he couldn’t change the climate, David at least wanted to re-create the cosy atmosphere he’d experienced while growing up in England, and that included a decorated Christmas tree. He glanced at the tinsel and baubles, the twinkling lights and the star on top, and thought it was perfect. Now all he needed were the gifts to put underneath.
“Um, did you pick up the turkey and ham?” he asked, hoping Scott had forgotten so there was a chance to grab the hidden presents from the bedroom closet.
“Yes, and the prawns.”

“The what?”
“Prawns. You know, for dinner.”
“Christmas dinner?” David stared at Scott, aghast. Surely he couldn’t be serious.
Scott grinned at him, his pale blue eyes lit with amusement. “Yes. It’s a tradition of ours.”
David was all for traditions, but prawns, on Christmas day? “Why?” he asked.
“My grandmother started it. She didn’t want to be cooking on a hot summer’s day, so she got my granddad to go and buy something that could be eaten without her having to cook it. He came back with prawns.” Scott tilted his head to the side. “We’re not the only ones to do it. A lot of Aussie’s have prawns on Christmas day.”
“Do you still have pudding and mince pies?”
“Of course, but we have cream or ice-cream instead of hot custard.”
“Oh.” David liked custard. His mom used to make it from scratch. Not that he’d be able to do that himself, but he wasn’t sure he wanted to go without it completely.
“Don’t worry, sweetheart. I got you some.”
“You did?”
Scott wrapped his fingers around David’s ankle, absently rubbing a scar he’d got while learning to ride his bike as a child. “Of course I did. I also bought all the ingredients to make a trifle, just in case.
So maybe Scott did get it. David smiled then leaned down to capture Scott’s firm lips. They were warm, and tasted of…well, Scott.
“Do you think we can start some traditions of our own?” David asked while sliding his arms around Scott’s neck.
“Yes,” Scott murmured. “And that’s letting me put up the star every year so you don’t have to climb a ladder ever again.”
“Okay.” David was quick to agree, but he was thinking of a different kind of tradition. One in which they removed all their clothes. 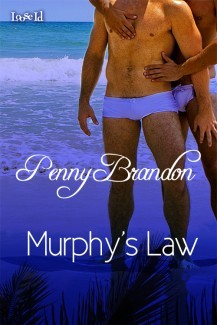 Fed up of trying to fly under his step family's radar, David sets off to Australia to get away from their constant harassment. Maybe there he can be himself, be free, be with someone who can help him forget about his problems for a while. Meeting Scott, who not only thinks he's sexy but shows him how much over and over again, is perfect. And Scott doesn't care that he's accident prone. Well, David is everything prone; what can go wrong does. And falling in love with someone he nearly kills is about as wrong as it can get.


Scott likes his sex uncomplicated, preferably with someone just passing through, but his family want him to settle down with some nice young man. To get away from their meddling he heads to Bondi Beach. That's where he meets David, a man who just pushes his buttons, and the fact that he's looking for the same thing Scott is, makes him ideal. However, he falls in love with David--sassy attitude, accidents, and adorable accent included. But how is Scott going to persuade David to stay with him, especially as David's seriously upset about nearly getting him killed?


Blog ǀ Facebook ǀ Goodreads
I’ve been writing for years, but have only recently realised others are interested in what I write. I’m a romantic who believes everyone can fall in love if only they open their heart to the possibility.

a Rafflecopter giveaway
Posted by Bronwyn at 12:30 am
Email ThisBlogThis!Share to TwitterShare to FacebookShare to Pinterest
Labels: giveaway, Guest