Love is Love – The End 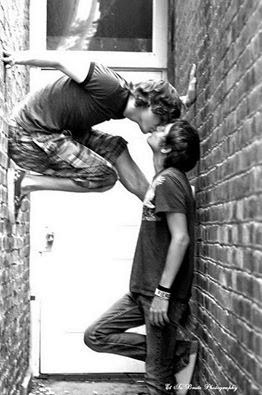 Kody’s bedroom window was two stories up. Both boys stood, a little awkward, a little lost as they watched each other, shifting feet and goodbyes running around them.
They’d been out for a couple of hours, strolling the streets, hanging with their mates in the park, drinking, smoking, the usual, really, and like always they’d end up in the narrow walk way of the two apartment blocks. One housing Kody, the other him, though unlike his mate, he could just walk through the front door, he’d be surprised if his parents were even home.
“’Nite, than,” Kody said, his legs bracing himself for the short leap he’d take before climbing up the walls and through his open window.
“Night,” I sighed, hating the fact that I’d have to go home, alone.
Just as his feet were around my shoulders, Kody leant in, I opened my mouth wondering what he wanted, but before words came out lips hit mine.
Shutting me up instantly, I froze for a nanosecond before leaning into the kiss. I wasn’t sure who added tongue first but suddenly they invaded each other’s mouths.
Then it was gone, Kody pulled back, I settled onto my heels, both of us watching what the other would think, even if it was clear we’d both been in it together.
“Right then,” Kody smiled, “C-ya tomorrow.”
“Right, tomorrow,” I said lamely as I watched Kody scale the wall and disappear into his window, only then did I allow my fingers to poke at my lips, remember the feeling, lingering in the glow.
Right. Huh. Awesome.
I pulled myself together and went home.


First Day & Hop  Links and Other Details
Day 2 ǀ Day 3
Day 4 ǀ Day 5 ǀ Day 6
Day 7
I hope you enjoyed my hop week, as well as everyone else who put up something for the event.
hope to see you all next time

a Rafflecopter giveaway
Posted by Bronwyn at 12:30 am
Email ThisBlogThis!Share to TwitterShare to FacebookShare to Pinterest
Labels: Challenge and/or Hop, giveaway, prompts