Hop for Visibility Awareness and Equality


Hi! Welcome to the Hop for Visibility Awareness and Equality. You might know them as the Hop Against Homophobia, Bi and Transphobia.

Their mission statements (find here): “The mission of Hope for Visibility, Awareness, and Equality is to foster an environment of inclusion and positivity within the LGBTQI+ community. We hope to bring awareness to discrimination and celebrate our diversity not only within the community at large but within our own genres and books. We also hope to engage authors, readers, bloggers, and artist to get involved in ending discrimination while promoting visibility, awareness and equality for all sexual orientations and gender identifications.”

It always fascinates me that we call hatred a phobia. I’m not sure when it happened or why. But I’d guess it came around the time when saying you feared it meant you had an excuse to kill it.

I’m going to go off course a little, but I fear spiders. It’s irrational, they’ve never done anything to me, and yet I squeal and make a huge fuss whenever one is near me. The bigger the more I fear it. And for a long time, hell, until recently I said I hated them. I hated spiders. It wasn’t until the last time we had a spider in our house and the first thing my children did was tell me to kill it. Just like that, as if it wasn’t anything in it. As if it’s life didn’t deserve to be lived because I was scared. The same thing happened on facebook. I put a picture up of the nasty looking beast and suddenly my comments were filled with death. Everyone screaming (in a sense) for it to be dead. To be cast from the world because we have a fear.

The thing is I do honestly fear spiders. I don’t know why. There’s no reason behind it. They scare the shit out of me to a point where I sweat. I shake and I break down completely just from seeing one. Just from knowing it’s around. To be honest, because it was in my bathroom, the room where my toilet was, I stop going until I was about to burst and even then I had real thoughts of just wetting myself, or going outside and peeing, because I couldn’t handle being in the same room as this spider.

That’s what fear is. That’s what we are saying these people are. That we are to a point of breaking down in fear at the idea of someone having a different sexuality to ourselves, a different idea of what we want them to be. Of what we assume they should be, because we’ve been told countless times that there is only one way of seeing things, one way of living. And yet if you were a straight white couple then you’re allowed to break the mould a little by wearing all black or dying your hair, of having children young of not having them at all. You’re allowed to break that mould because deep down you’re still in it. You’re still what other people want you to be. 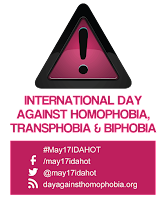 The thing is, no one is that anymore—hell, no one has been that since the 70’s and yet we are still so clueless as to anything outside ourselves while we judge everyone who isn’t exactly the same as what we are. And that’s not fear, that’s saying you’re allowed to call it fear which makes it irrational which then allows you to never actually look outside yourself and learn something new. Something that you should already know, which is that it’s none of your business, nothing outside yourself is your business.

It’s hatred. It’s hatred labelled as fear because they want the world to stay blind and to create war and hunger and class. That’s what it is, calling it fear is allowing the world to strip us of our rights as equals and allows us to class someone as lesser then they are, and if you’re lesser that means you don’t actually deserve the common decency all human beings should get.

And apparently this is a strong point for me, but you know what I’m not sorry and I’m sick of the fact that we call something a phobia when it’s purely hate. Hate designed to make those less educated follow the rolls of people who should know better and should teach them better.

First Prize: 1 random winner will get paperback of BonyDee Press Anthology (if wish for it signed, you will have to allow for extra time in delivery)

Second Prize: 2 random winners will get 2 e-books from my backlist

comment on this post, it can be anything, and I will pull the winners at the end of the hop (please note you must come back to the blog in order to see if you've won, I will post links in my social media places)

Posted by Bronwyn at 2:02 pm
Email ThisBlogThis!Share to TwitterShare to FacebookShare to Pinterest
Labels: Challenge and/or Hop, giveaway